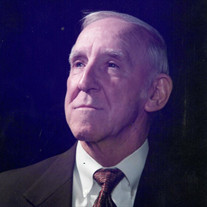 A Mass of Christian burial will be celebrated at 10:00 AM Thursday, February 11, 2021, at St Pius X Catholic Church in Lafayette for L. D. “Poss” Melancon, 93, who passed away peacefully Sunday at his residence. The family request that visiting hours be observed at the funeral home from 4:00 PM until 9:00 PM on Wednesday, February 10, 2021 and continue on Thursday from 8:00 AM until 9:00 AM. A rosary will be prayed at 6:00 PM on Wednesday. Reverend James Brady, Pastor of St Pius X Catholic Church, will be the Celebrant of the funeral Mass and will conduct the burial services. Lectors will be his grand-daughters Tessa Melancon Himel and Colleen Melancon Bonvillain. His youngest grand-daughter, Anna-Clare Melancon, will be the Gift bearer. Pallbearers are his six grandsons: Don Coppola, Chad Coppola, Aaron Melancon, David Melancon, Kyle Melancon and Kevin Melancon. Music will be provided by soloists Jodi Bollich, Karen Melancon and Kyle Melancon, accompanied by Kevin Martin, and instrumentalist Will Green - trumpet and Lauren Baker - violin. Musical selections will be, "You Are Mine", "On Eagles Wings", “Shepard Me, O God”, "Ave Maria”, “The Anchor Holds”, and "Battle Hymn of the Republic". Entombment will be in Lafayette Memorial Park Mausoleum. Survivors include his three children, Marty (his friend Pen) Melancon, Tomie Melancon Coppola, and Tim (Karen) Melancon; grandchildren Tessa Melancon Himel, Aaron Melancon, David (Brandy) Melancon, Don (Amy) Coppola, Chad (Crystal) Coppola, Colleen Melancon (Charles "Buddy") Bonvillain, Kyle (Elise) Melancon, Kevin Melancon (his friend Kristen), and Anna-Clare Melancon, 14 great-grandchildren and brother Claude (Georgie) Blakely, and many nieces and nephews. He was preceded in death by his parents Louis Dallas Melancon, Sr. and Cornelia Saltzman Melancon Blakely, his wife of 44 years Eline Ducote Melancon, his brother Lawrence Melancon, sisters Verna Herring and Ouida Goynes. Poss was born in Kaplan, Louisiana and grew up in Lafayette, attending Lafayette High School until enlisting in military service. At age 16, he joined the U.S. Maritime Service (Merchant Marines). For entertainment he boxed while on the ship and got his name “Poss” – short for possum, after winning the match when it looked like he would lose (The sailors said, “He must have been playing possum”). At age 18, he enlisted in the U.S. Army during WWII, serving in the Pacific Theater including the Liberation of the Philippines and the Occupation of Japan. He received numerous medals and commendations comprising of WWII Service Metal, Expert Infantryman’s Badge and Combat Infantryman’s Badge. After returning to Lafayette, he worked for the Bell Telephone Company starting out climbing poles and retiring after 39 years as a district manager. He attended SLI (now the University of Louisiana) with studies in psychology. He was an active Eucharistic minister in hospitals and nursing homes, a charter member of the Knights of Columbus, coached youth athletics, and was involved in many other volunteer service work. He was a dedicated husband, father, and devout Catholic. He loved spending time with his children, grand-children and great-grandchildren, waiting on friends and family, always offering a coca cola, having a drink of scotch and giving his signature butterfly wave when he said good-bye. Some famous “Possisms”: “Run for the roundhouse, they can’t corner you there”, “people always say I look good, but never that I’m good looking”, “That brings back childhood memories”, “That’s’ how it goes, first your money, then your clothes”. Memorial contributions can be made in Mr. Melancon’s name to the St. Pius X Building Fund, P.O. Box 80489, Lafayette, LA 70598-0489 or Hospice of Acadiana, 2600 Johnston St., Lafayette, LA 70503 Personal condolences may be sent to the Melancon family online at www.delhommefunerlhome.com. Delhomme Funeral Home - 1011 Bertrand Drive Lafayette, LA. 70506 337-235-9449.

A Mass of Christian burial will be celebrated at 10:00 AM Thursday, February 11, 2021, at St Pius X Catholic Church in Lafayette for L. D. &#8220;Poss&#8221; Melancon, 93, who passed away peacefully Sunday at his residence. The family request... View Obituary & Service Information

The family of L. D. "Poss" Melancon created this Life Tributes page to make it easy to share your memories.

A Mass of Christian burial will be celebrated at 10:00 AM Thursday,...

Send flowers to the Melancon family.