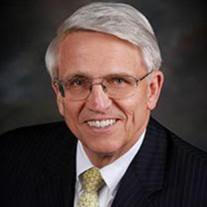 L. Lane Roy died at home on October 17, 2020. Mr. Roy was 75 years old and a lifelong resident of Lafayette, Louisiana. He was born on September 8, 1945, the child of George Melchior Roy and Rita Grace Chaisson, and the grandson of Cyprien Bienvenue... View Obituary & Service Information

The family of L. Lane Roy created this Life Tributes page to make it easy to share your memories.

Send flowers to the Roy family.