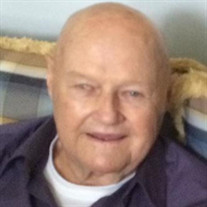 Lawrence John LeBlanc, 92, of Lafayette, LA, peacefully passed away on February 3, 2021, surrounded by loved ones, in the comfort of his home. Lawrence was born on September 4, 1928, to John LeBlanc and the former Rita Bernard in the community of LeBlanc, in Vermillion Parish. He attended St. Cecilia High School in Broussard. He met the love of his life, Margaret Ozenne, in downtown Lafayette, after noticing a beautiful brunet who always walked across the street from his work. When asked recently about their dates, he fondly recalled, “we just held hands.” They were married on July 30, 1950, at Saint Martin de Tours Catholic Church in St. Martinville, LA, until her passing in 2007. Lawrence and Margaret had one cherished daughter, Stephanie. He worked for over 45 years at the old Auto Parts House in downtown Lafayette, until his retirement in 1990. As a true Cajun, Lawrence loved to BBQ, dance at weddings, fry fish, boil crawfish, drink Coors Light, make Bloody Marys, speak Cajun French and spend time out on his family’s farm near Erath. He was known by many of his friends as “Cassino” and his grandsons lovingly called him “Pere.” Lawrence was predeceased by his beloved wife, caring parents and sister Clara. He is survived by his daughter Stephanie Lane and her husband Jerome as well as his grandchildren: Lucas Lane, his wife Ashley and their children Landry and “little” Lawrence; Evan Lane and his girlfriend Kayla Ryan. He will also be missed by his companion Mrs. Norma Segura and benevolent friends Myron & Renee Lane, Harold Duplechin, Ken & Joan Fawcett, and many other friends across Acadiana. The family would like to thank Dr. Juan Perez and his staff as well as the staff of NSI Home Health and Hospice, especially the patience and care provided by Leslie Carrere, RN. A celebration of his life will be held at Delhomme Funeral Home on Bertrand on Saturday, February 13. Visitation will begin at noon with a funeral to follow at 1 PM. Chaplain Paul Broussard, will conduct the funeral services. In lieu of flowers, please consider a donation to NSI Hospice. Personal condolences may be sent to the LeBlanc family at www.delhommefuneralhome.com. Delhomme Funeral Home, 1011 Bertrand Dr., Lafayette, LA is in charge of funeral arrangements.

Lawrence John LeBlanc, 92, of Lafayette, LA, peacefully passed away on February 3, 2021, surrounded by loved ones, in the comfort of his home. Lawrence was born on September 4, 1928, to John LeBlanc and the former Rita Bernard in the community... View Obituary & Service Information

The family of Lawrence "Peré" LeBlanc created this Life Tributes page to make it easy to share your memories.

Send flowers to the LeBlanc family.