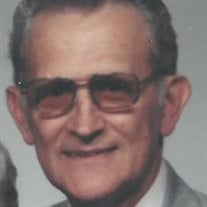 A Liturgy of the Word Funeral Service will be held at 12:30 PM on Monday, December 2, 2019 at the Delhomme Chapel of the Flowers in Delhomme Funeral Home- Bertrand, Lafayette, LA for Learly “L. F.” Francoise Boudreaux, 98, who passed away November 28, 2019 at Maison de Lafayette Nursing Facility in Lafayette. Father Kenneth Domingue, Pastor of St. John Berchman’s Catholic Church in Cankton, LA. will officiate the service. The family is requesting visiting hours to be held Monday at Delhomme Funeral Home from 9:00 AM until time of service. A rosary will be recited at 11:45 AM the morning of the service by Susan Reaux DeRousselle and family. Learly “L. F.” Francoise Boudreaux was born on December 7, 1920 to Duprelie and Zona Landry Boudreaux in Abbeville, LA. “L. F.” was a graduate of Abbeville Senior High School and S.L.I. University (now University of Louisiana at Lafayette). Shortly after the onset of World War II, he entered the service of his country, participating in several combat campaigns in the European Theatre as a member of the United States Army; a service he was extremely proud of. Following completion of his service, he was honorably discharged and returned to the United States. He first became the band director at Vinton High School for several years. He then began his career in manufacturing with Southern Steel, then several years with Mayfair Industries. “L.F.” then moved to Starline Industries where he rose to the position of Vice President of Operations until his retirement in 1983. “L. F.” married the love of his life, the former Jeanne Boudreaux in Lafayette and had one son, Dale James Boudreaux and one grandson, Garett Lane Boudreaux. Upon his retirement, “L. F.” or “Boud”/ “Shug” as Jeanne affectionately called him, spent several years traveling the country and world from one adventure to another. “L. F.” and Jeanne were married for sixty-three (63) years until her passing in 2005. An avid outdoorsman, “L. F.” loved spending many days fishing and working in his garden. He loved entertaining and cooking for his family. His garden vegetables were the talk of the family as was his famous chili recipe that has been passed down for generations and to many friends of the family. A man of extreme spiritual faith, “L. F.” and Jeanne were lifelong parishioners of Our Lady of Fatima Church where he served as an usher. “L. F.” leaves behind to treasure his memory his son, Dale James Boudreaux; one grandson, Garett Lane Boudreaux and wife, Dayna; his great grandchildren, Neil James Boudreaux and wife, Lindsay, Meaghan Marie Boudreaux Landry and husband, Logan; one great-great grandson, Beckett Lane Boudreaux; one sister, Lona Blackwell; several nieces, nephews, and cousins. “L. F.” was preceded in death by his wife, the former Jeanne Boudreaux; his parents, Duprelie and Zona Landry Boudreaux; sisters, Lilia Bergeron, Lilies Landry, Lillian Robichaux, Lainee Lachaussee, Louella Broussard, Loula-May LeBouef; and one brother, Pearly Boudreaux. Serving as pallbearers will be Dale James Boudreaux, Garett Lane Boudreaux, Neil James Boudreaux, Logan Landry, and Joey LeBouef. The United States Army will provide an honor detail and graveside honors. The family would like to send a special thank you to the staff, physicians, nurses, and nursing assistants at Maison de Lafayette for their care over the last fourteen years. Special thanks go out to Hospice of Acadiana for providing “L. F.” with comfort, quality of life, and dignity to the end. The family requests that donations in the name of Learly “L. F.” Francoise Boudreaux be made to Hospice of Acadiana or St. Jude Children’s Research Hospital. Personal condolences may be sent to the Boudreaux family at www.delhommefuneralhome.com. Delhomme Funeral Home, 1011 Bertrand Drive, Lafayette, LA is in charge of funeral arrangements.

A Liturgy of the Word Funeral Service will be held at 12:30 PM on Monday, December 2, 2019 at the Delhomme Chapel of the Flowers in Delhomme Funeral Home- Bertrand, Lafayette, LA for Learly &#8220;L. F.&#8221; Francoise Boudreaux, 98, who passed... View Obituary & Service Information

The family of Learly "L.F." Francoise Boudreaux created this Life Tributes page to make it easy to share your memories.