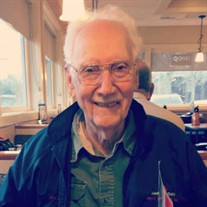 Funeral Services will be held at 12:00 PM on Thursday, May 19, 2022 in Delhomme Chapel of the Flowers for Leon Vice, Jr., 95, who passed away on May 10, 2022. Pastor John Vice will conduct the funeral services. Burial will take place in Hayes Cemetery, Iowa, LA. Mr. Vice, a resident of Lafayette, was the son of the late Leon Vice Sr. and the former Lydia Primeaux. Our precious father Leon Vice, Jr. left this world for his heavenly place at the feet of his Savior Jesus Christ on the morning of Tuesday, May 10th. He was 95 years old. He was a good man as described by Scripture because he gave his life to Jesus in 1951. He was a great man because by any and all standards he only thought of others, never himself. Daddy always led by example and everyone and their pets followed. Leon's monuments are not of steel and stone; his monuments are of flesh and blood, the men and women he led to relationship with Jesus Christ, his wife Louis Parker Vice whom he honored and adored all of her life, his son John and daughter Laura whom he guided into adulthood with character, love, and respect, and the lives of his four grandchildren and 5 great-grandchildren. Our daddy was the person we wanted to be when we grew up. He is the greatest man we have ever known. His children, their spouses and grandchildren hope by God's grace to carry on Leon's legacy of faith in Jesus Christ, honesty, integrity, gentleness, strength, compassion, and unconditional love. Our daddy was the same man everywhere and with everyone-privately and publicly. He treated all people the same-with respect and mercy. A loved one recently prayed, "Lord, if You can't make me more like Jesus, just make me more like Leon." Leon, Jr. was born into and grew up in South Louisiana's beautiful Cajun Country. He spoke Cajun French as a boy and continued to use the Cajun language terms of endearment with his grand dogs. He served with the U.S. Army in Japan as a staff sergeant at the end of WWII. When he returned home after the peace was declared, Leon followed in his father's footsteps into the oil fields of Gulf Oil. In August of 1947 Leon met Louise Ruby Parker in Hayes, La and 3 months later they married. Daddy always said of Momma that she was the most beautiful redhead "this side of heaven." Except for a short emigration to Longview, Texas and Oklahoma City, Leon and Louise lived along 110 between Lafayette and New Orleans all of their lives. Everywhere he planted his family, Leon joined a church and inevitably became a church leader and Bible teacher. His last Bible study group met at his house Easter Sunday, April 17th, 2022 less than a month before his passing. He was an elder of the Bridge Church in Breaux Bridge, Louisiana. Leon's effect on the lives of people was like a peace-time monumental battleship, plying the deep waters of life, powerfully affecting everything in its wake: lives changed forever, little pockets of the world made better, light shined into darkness. Matthew 25:21 "His Lord said to him, 'Well done, good and faithful servant; you were faithful over a few things, I will make you ruler over many things. Enter into the joy of your Lord."' A close friend of the family described Leon as one of the generals of the Lord God welcomed into Heaven by the multitudes there because of Leon Vice, Jr. Thank you, Daddy, for the life you gave us. Enjoy Heaven until we join you and Momma and Jesus. We'll miss you until then. He is survived by his daughter, Laura Vice Byrne (Gregory); son, John L. Vice (Dianna); grandchildren, Christopher S. Byrne (Katy), Tara Vice Warfel (Robert), John Patrick Vice, and Hannah Rae Vice; great-grandchildren, Abigail, Lilly, Lincoln, Cooper, and Jude; sister, Carolyn Sue Vice Trahan (Paul); and sister-in-law, Dorothy "Dot" Vice. He was preceded in death by his wife of 58 years, Louise Parker Vice; parents, Leon and Lydia Vice; sisters, Mary Ann Vice and Helen Vice Bahnsen; and brother, Alpha Vice. The family requests that visiting hours be observed at Delhomme Funeral Home - Bertrand on Thursday, May 19, 2022 from 10:00 AM until the time of service. Pallbearers will be Christopher Byrne, John Patrick Vice, Pastor Rod Chitwood, Bryan Arabie, Tara V. Warfel, and Hannah R. Vice. Personal condolences may be sent to the Vice family at www.delhommefuneralhome.com Leon Vice, Jr. and his family were cared for and entrusted final arrangements to Delhomme Funeral Home, 1011 Bertrand Drive, Lafayette, LA. Copyright Delhomme Funeral Homes, Inc. May 2022

Funeral Services will be held at 12:00 PM on Thursday, May 19, 2022 in Delhomme Chapel of the Flowers for Leon Vice, Jr., 95, who passed away on May 10, 2022. Pastor John Vice will conduct the funeral services. Burial will take place in Hayes... View Obituary & Service Information

The family of Leon Vice, Jr. created this Life Tributes page to make it easy to share your memories.

Send flowers to the Vice, family.