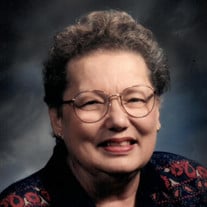 Funeral Services will be held at 1:00 PM on Thursday, January 14, 2021, in the Delhomme Chapel of the Flowers for Loise Louviere, 89, who passed away on January 9, 2021. Deacon Robert Klingman will conduct the funeral services. Burial will take place in Holy Mary Mother of God Cemetery. Mrs. Louviere, a resident of Lafayette, was the daughter of the late James Burton Eason and the former Lithia Marie Aucoin. Loise graduated from Jeanerette High School, class of 1950, and began teaching in 1963 at Ascension Day School. In 1969, she transferred to the Lafayette Parish School System, where she worked until retirement in 1997. Loise was named Teacher of the Year in 1990 and then President of the Hub City Kiwanis in 1993. An avid gardener, she loved roses and working in her yard. Though she will be dearly missed by her family, they know Loise is now celebrating being reunited with her late husband, after 30 long years. She is survived by her son, Duke J. Louviere (Judi); grandchildren, Jamie L. Rabalais and Jan L. Prather (Jason); great-grandchildren, Madyson Guilbeaux, Jay Rabalais, Kate Rabalais, Leah Rabalais, Ellie Prather, Hudson Prather and Evelyn Prather; and sister, Olive Hasha. She was preceded in death by her husband Earl J. Louviere; grandson, Jason M. Louviere; parents, James Burton and Lithia Eason; brother, James Burton Eason, Jr; and sisters, Ida Tolbert and Byrdie Eason. The family requests that visiting hours be observed at Delhomme Funeral Home - Bertrand on Thursday, January 14, 2021 from 10:00 AM to 12:45 PM. A Rosary will be prayed at 11:30 AM Thursday morning in the funeral parlor. Visiting hours will continue following the Rosary until the time of service. Pallbearers will be Jay Rabalais, Jason Prather, Ryan Maturin, Doug Leger, Randy LeBlanc and Marvin Quebodeaux. Personal condolences may be sent to the Louviere family at www.delhommefuneralhome.com. Delhomme Funeral Home, 1011 Bertrand Drive, Lafayette, LA, is in charge of funeral arrangements.

Funeral Services will be held at 1:00 PM on Thursday, January 14, 2021, in the Delhomme Chapel of the Flowers for Loise Louviere, 89, who passed away on January 9, 2021. Deacon Robert Klingman will conduct the funeral services. Burial will... View Obituary & Service Information

The family of Loise Louise Louviere created this Life Tributes page to make it easy to share your memories.

Funeral Services will be held at 1:00 PM on Thursday, January...

Send flowers to the Louviere family.