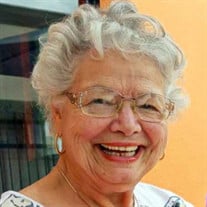 Lolita Emelia Diaz Granados Tilley, 88, passed away March 30, 2020, at Our Lady of Lourdes Regional Medical Center, Lafayette, Louisiana. On April 3, 2020, in a private graveside service for her immediate family, she was laid to rest in the cemetery of the Cathedral of Saint John the Evangelist. A funeral mass and memorial service will be held at a later date. Lolita was born on December 11, 1931, in Detroit, Michigan. She was the first-born child of Irene Corne, born in New Orleans, La., and Alberto Diaz Granados, born in Santa Marta, Colombia. She grew up in Detroit Michigan, and went to Catholic schools, including a year a Marygrove Catholic College. She often talked about her two Detroit childhood joys - the blooming of the Lilies-of-the-Valley, signifying springtime; and, her yearly trips to Broussard and St. Martinville to spend summertime with her Billeaud and Corne cousins. Her mother, Irene, moved the family back to the Lafayette area when Alberto, her father, became ill. Irene's brother, Albert Corne, Sr., M.D., took care of Lolita's father until the time of his death; and took care of her family too, eventually walking Lolita down the aisle at her wedding. Lolita graduated from U.S.L., now U.L. (University of Louisiana at Lafayette), with a degree in education and moved to Houston with her cousin, Helen Billeaud Baker, where she taught school at Hamilton Elementary in the Heights. When Helen married, she moved to New Orleans and very briefly considered a vocation as a Carmelite nun but quickly chose to work planning events for young physicians at Hotel-Dieu Catholic Hospital in New Orleans, where she met her husband, Joe C. Tilley, M.D. Joe and Lolita were married on October 23, 1955 at our Lady of Wisdom Chapel on the U.L. Campus. She was a U.S. Air Force wife stationed in San Antonio and Harlingen before moving back to New Orleans and then eventually Baton Rouge, Louisiana. Lolita loved God, her family, her community, travel, music, painting, learning, and the cultural arts; and she gave generously, kindly, and graciously to all. She obtained her Masters in Education in the late 1980s from Southeastern University in Hammond, La. and taught gifted and talented Science in East Baton Rouge Parish for several years. She and her husband were on many committees at St. Aloysius Church and School and active life-long participants. Together, for many years, they were leaders in "Engaged Encounter" and "Marriage Encounter" in the South Louisiana area. She also served as: President - 1973 - Catholic High School Mother's Club; President - (1978 - 1979) and Chaplain (2001 - 2002) East Baton Rouge Parish Medical Society Alliance; she actively worked with the ballet and other cultural and educational groups in Baton Rouge. She loved traveling the world with her husband and her children. In 2004, after the death of her husband, she moved to Lafayette, La., where she had a wonderful social life, with her sister and brother, cousins, sorority sisters, other life-long friends, and new friends. She became a member of St. John's Cathedral and was a museum docent for several years. She played bridge several times a week with several different groups, loved her Saturday morning coffee book club and devotedly prayed the rosary. Lolita was preceded in death by her parents, her husband, Joe C. Tilley, M.D., her sister, Rosella Rainbolt, and brother, Albert Diaz Granandos. She is survived by her sister, Anita Mullins of Lafayette, and her children, Joseph C. Tilley (Debbie) of Hammond, Louisiana, Therese Tilley of Houston, Texas, and Christopher Tilley (Sharon) of Larkspur, California. She has eight grandchildren and three great-grandchildren. Donations may be made in Lolita's name to: The Discalced Carmelite Monastery, 1250 Carmel Dr., Lafayette, LA 70501; phone 337 232-4651 or to the Sisters of Divine Providence Convent at Our Lady of the Lake University, 515 SW 24th St., San Antonio, TX 78207 or online at cdptexas.org. The family wishes to thank the physicians, nurses, medical staff, Reverend Chester Arceneaux and especially her cousins, who gently shepherded us through the last few days. Personal condolences may be sent to the Tilley family at www.delhommefuneralhome.com. Delhomme Funeral Home, 1011 Bertrand Drive, Lafayette, LA is in charge of funeral arrangements.

Lolita Emelia Diaz Granados Tilley, 88, passed away March 30, 2020, at Our Lady of Lourdes Regional Medical Center, Lafayette, Louisiana. On April 3, 2020, in a private graveside service for her immediate family, she was laid to rest in the... View Obituary & Service Information

The family of Lolita Emelia Diaz Granados Tilley created this Life Tributes page to make it easy to share your memories.

Send flowers to the Tilley family.