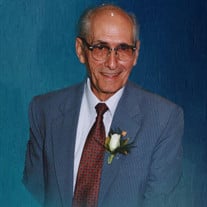 A Mass of Christian Burial will be held at 11:00 AM on Friday, June 4, 2021 in St. Joseph Catholic Church - Milton, LA for Lynwood Vincent, 101, who passed away on May 31, 2021 at his residence. Father William Schambough, Pastor of St. Joseph Catholic Church - Milton, will be Celebrant of the Mass and will conduct the funeral services. Father Louis Richard, Pastor of St. Mary Magdalen Catholic Church - Abbeville, will serve as an Honorary Co-Celebrant of the Mass. Burial will take place in St. Joseph Mausoleum. A native and lifelong resident of Milton, Lynwood was the son of the late Asa Vincent of Vermilion Parish and the former Edith Sellers Vincent of Milton. He was a veteran of World War II, serving the 1st Army, 7th Corps, 9th Infantry Division, having served as a Corporal in the European Theater of Operations. He was awarded six Bronze Stars and the French Croix de Guerre with a Bronze Star, in addition to his numerous campaign medals. He was a member of VFW Post 9210 and a member of St. Joseph Catholic Church. After returning from the war, he was employed by the Water Pumping Plant of Maurice, and Young Industries of Youngsville, then went into sales at Montgomery Ward, later at Ray Chevrolet, and lastly, Wickes Lumber, for many years, as Assistant Manager and Sales, until he retired. Lynwood will always be remembered by his family and friends as an engaging storyteller with a wonderful sense of humor. He was full of jokes and kept everyone laughing, even during his final days. He loved John Wayne movies and Big Band music. His knowledge of family histories in the local areas was unequaled. Survivors include three sons, Donald Robert Vincent and his wife Brenda of Milton, LA, Lynn Everett Vincent and fiancée, Honey Ledoux of Milton, LA, and Benny James Vincent and his wife Denice of Kemah, TX; one daughter, Mary Ellen Winters and her husband Bob; three grandsons, Michael Shane Vincent of Houston, TX, Cy Everett Vincent and partner Minh Nguyen of Orlando, FL, and Ryan Christopher Winters and spouse Jacob Williams of Lafayette, LA; four granddaughters, Amy Lynette Stewart and husband Joel of Aurora, CO, Sister Nina Michelle Vincent, OLS of Alexandria, LA, Christie Catherine Winters of Houston, TX, and Melody Claire Winters of Orlando, FL; three great-grandchildren, Troy Stewart, Shane Vincent, and Stephen Vincent; several nieces and nephews; three step granddaughters, Christin, Janna, and Delane Dupuy; and three step grandsons, Tyler, Taylor, and Trey Price. He was preceded in death by his wife, Josie Hidalgo Vincent; parents, Edith Sellers Vincent and Asa Vincent; three sisters, Annie Mae Vincent, Althea Vincent, and Louise Menard; and one brother, Freddie Vincent. The family requests that visiting hours be observed at Delhomme Funeral Home - Maurice on Thursday, June 3, 2021 from 4:00 PM to 9:00 PM. A Rosary will be prayed at 6:30 PM on Thursday evening and at 9:00 AM on Friday morning in the funeral home. Visiting hours will continue Friday, June 4, 2021 from 8: 00 AM - 10:30 AM. Pallbearers will be Donald Vincent, Lynn Vincent, Benny Vincent, Michael Shane Vincent, Cy Vincent, and Ryan Winters. Personal condolences may be sent to the Vincent family at www.delhommefuneralhome.com. Delhomme Funeral Home, 200 Chief H. Fred Road, Maurice, LA is in charge of funeral arrangements.

A Mass of Christian Burial will be held at 11:00 AM on Friday, June 4, 2021 in St. Joseph Catholic Church - Milton, LA for Lynwood Vincent, 101, who passed away on May 31, 2021 at his residence. Father William Schambough, Pastor of St. Joseph... View Obituary & Service Information

The family of Lynwood Vincent created this Life Tributes page to make it easy to share your memories.

Send flowers to the Vincent family.