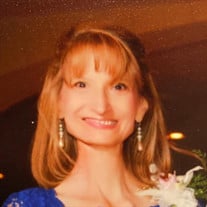 A Mass of Christian Burial will be held at Holy Cross Catholic Church in Lafayette, LA on Wednesday, February 9th, 2022, at 12pm for Mary Ann B. Fontenot, 61, who passed away on February 4, 2022 at Our Lady of Lourdes Heart Hospital. Fr. Mario Romero, Pastor of Holy Cross, will be Celebrant of the Mass and will conduct the funeral services. Burial will take place in Lafayette Memorial Park. Mary Ann, a resident of Lafayette, was the daughter of the late Stanley L. Bridges and the former Jeanne Marie LeBlanc Bridges of Covington, LA. After graduating from St. Scholastica High School in downtown Covington, she attended pharmacy school at Northeast University (now UL Monroe) and graduated in May of 1983. It only took a year in Lafayette before she met the love of her life, her future husband of 27 years, Jeffery L. Fontenot, who was also working as a pharmacist at the time. They were deeply in love, and Jeff received so much joy in surprising his lovely bride often with her favorite gift of fresh flowers. Her entire life changed on a dime in 1993 when she was shockingly diagnosed with tongue cancer, although she had never smoked a cigarette in her life. After multiple rounds of chemo and radiation, she still had part of the cancer left in her body, and she was sent home from MD Anderson with no other treatment options and less than a 25% chance of surviving the next 12 months. Putting all of her Faith in God’s mercy and Divine providence, she miraculously rebounded over the next 3 months and follow up scans revealed that she was now cancer-free. She lived with her physical scars and multiple complications from her radiation for the next 29 years until her death. Mary Ann’s character and identity were built on her dedication to her family and devotion to her Catholic Faith. An active member of Holy Cross Catholic Church since 1983, she was known as one of the best Catechism teachers the Catholic Faith could produce. She gave her testimony of Faith and trust in God through her ordeal with cancer yearly to the high school candidates. Everyone who knew her could attest to her love and devotion to her three children—Greg, Amy, and Matthew—and her four grandchildren: Peter, Elizabeth, Zelie, and Veronica. She never missed an opportunity to shower her children and grandchildren with gifts of food, snacks, and books (and of course toys for the grandchildren!). She was a lifelong learner, and she joyfully passed on those passions to her family. After much encouragement over the years, she finally wrote all of her stories and life lessons down on paper in a book she published called Gratitude Opens the Door: Five Generations of a Faith-filled Family, available at Crossroads Collective on South College by Lafayette General and on Amazon.com. She is survived by her sons, Dr. Gregory J. Fontenot, his wife Rebecca and their four children: Peter, Elizabeth, Zelie, and Veronica; and Matthew Fontenot; and her daughter Amy Fontenot. She is also survived by her brother Dr. S. Louis Bridges, Jr and his wife Dr. Ginny Karle and their two children: Jack and Mary Katherine. She was preceded in death by her husband of 27 years, Jeffrey L. Fontenot; mother Jeanne Marie Leblanc Bridges and her father Stanley L. Bridges. The family requests that visiting hours be observed at Delhomme Funeral Home - Bertrand on Tuesday, February 8, 2022 from 5:00pm to 8:00pm. A Rosary will be said at 6:30pm at the funeral home. Visiting hours will continue Wednesday, Feb 9th from 8:00am until the time of service. Personal condolences may be sent to the Fontenot family at www.delhommefuneralhome.com. Mary Ann Fontenot and her family were cared for and entrusted final arrangements to Delhomme Funeral Home, 1011 Bertrand Drive, Lafayette, LA.

A Mass of Christian Burial will be held at Holy Cross Catholic Church in Lafayette, LA on Wednesday, February 9th, 2022, at 12pm for Mary Ann B. Fontenot, 61, who passed away on February 4, 2022 at Our Lady of Lourdes Heart Hospital. Fr. Mario... View Obituary & Service Information

The family of Mary Ann Bridges Fontenot created this Life Tributes page to make it easy to share your memories.

A Mass of Christian Burial will be held at Holy Cross Catholic...

Send flowers to the Fontenot family.