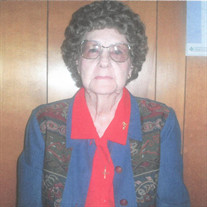 Funeral services will be held on Thursday, June 25, 2020, at 2:00 PM in the Delhomme Chapel - Scott for Mary Domingue, 97, who passed away on June 22, 2020. Fr. Steve LeBlanc, Pastor of St. Basil Catholic Church, will serve as Celebrant and will conduct the funeral services. Burial will take place in St. Theresa Cemetery. Mrs. Domingue a resident of Duson, LA was the daughter of late Rene Boneau, Sr. and former Edmay Anderson Boneau from Ossun. Mary was a member of St. Theresa of the Child Jesus Church. A native of Scott, La. Mrs. Domingue was born February 4, 1923 and was a lifelong resident of Duson, La. She retired from the Lafayette Parish School Board as a cafeteria worker. She is survived by two daughters, Donna Jones and Gaynelle Comeaux; one son, Jerry Domingue; four grandchildren, Shani Jones, Kodi Nepveux, Casey and Toby Domingue; eight great grandchildren; and one sister, Rita Hankel. She was preceded in death by her husband, Joseph C. Domingue, of 71 years’ her parents, Rene Boneau, Sr. and Edmay Anderson; two brothers, Robert and Rene Boneau, Jr.; son-in-law, James Jones; one great grandchild, Alie Domingue; one daughter-in-law, Sheila Domingue. The family requests that visitation be observed at Delhomme Funeral Home - Scott on Thursday, June 25, 2020, from 9:00 AM until the time of service. Recitation of the Rosary will be held at 10:00 AM in the funeral home. The family would like to thank the Lafayette General Fourth Floor nursing staff and Hospice of Acadiana caregivers. Memorial contributions in the name of Mary E. Domingue, may be made to Hospice of Acadiana at 2600 Johnston St., Suite 200, Lafayette, La. 70503. Personal condolences may be sent to the Domingue family at www.delhommefuneralhome.com. Delhomme Funeral Home, 705 Marie St., Scott, LA is in charge of funeral arrangements.

Funeral services will be held on Thursday, June 25, 2020, at 2:00 PM in the Delhomme Chapel - Scott for Mary Domingue, 97, who passed away on June 22, 2020. Fr. Steve LeBlanc, Pastor of St. Basil Catholic Church, will serve as Celebrant and... View Obituary & Service Information

The family of Mary Enix Domingue created this Life Tributes page to make it easy to share your memories.

Send flowers to the Domingue family.