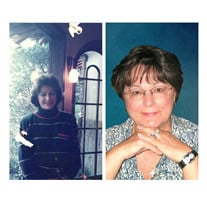 Memorial Services will be held at 1:30 PM on Thursday, August 12, 2021 in Calvary Cemetery of Lafayette, for Maxine "Mackie" Marie Perkins, 82, who passed away on August 6, 2021. "Mackie", a life-long resident of Lafayette, was the daughter of the late Samuel Arceneaux and the former Mabel Breaux. Maxine was proud of her work as an ICU nurse at Lafayette General Hospital for over 10 years. She was awarded the Department of the Army Commander's Award for Public Services, while at Camp Zama - Japan, for her service as Chairperson of the volunteers in the American Red Cross - Far East Headquarters. This was the highest Army award a civilian could be given. Her exemplary public service reflected great credit upon her. Finally, Maxine received great joy being with her great-grandson, Henri. Survivors include her beloved husband of 33 years, Gordon Rennie Perkins, retired BG, USA; daughter, Deborah Ann Clothier (Don) of Sunset, LA; step-daughter, Sheri Taylor (Troy) of Richmond, VA; step-sons, Gordon Scott Perkins of Northern VA and Steven Wayne Perkins of Windsor, CO; sister, Lou Ann Moreau (J.L. "Buddy"); granddaughter, Olivia Sampsell; great-grandson, Henri Sampsell; and numerous step-grandchildren. She was preceded in death by her son, Samuel R. Voorhies; grandson, Nicholas Sampsell; and parents, Samuel and Mabel Arceneaux. The family would like to thank the nurses of Our Lady of Lourdes Heart Hospital - Lafayette for the compassionate care, during their time of need. A special thanks to the many doctors and nurses that made her life easier over the years, especially Dr. Albert R. Corne, Jr. In lieu of flowers, the family requests that donations be made, in Maxine's memory, to the charity of their choice. Personal condolences may be sent to the Perkins family at www.delhommefuneralhome.com. Delhomme Funeral Home, 1011 Bertrand Drive, Lafayette, LA is in charge of funeral arrangements.

Memorial Services will be held at 1:30 PM on Thursday, August 12, 2021 in Calvary Cemetery of Lafayette, for Maxine "Mackie" Marie Perkins, 82, who passed away on August 6, 2021. "Mackie", a life-long resident of Lafayette, was the daughter... View Obituary & Service Information

The family of Maxine "Mackie" Marie Perkins created this Life Tributes page to make it easy to share your memories.

Memorial Services will be held at 1:30 PM on Thursday, August...

Send flowers to the Perkins family.