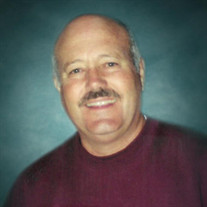 Funeral services will be held on Thursday, August 26, 2021 at 3:00 PM at Delhomme Funeral Home in Scott, LA for Melvin John Clark, age 73, who passed away on Saturday, August 21, 2021 at his residence with family surrounding him after a lengthy and brave battle with cancer. The family requests that visitation be observed at Delhomme’s Funeral Home in Scott on Thursday from 10:00 AM until time of services. A Rosary led by Phyllis Daigle Huval and Carolyn Daigle Hulin will be prayed on Thursday at 12:00 PM. Officiant for the service will be Fr. Mark Derise. Chris Richard, Emily Sturm and Denise Melancon will provide music. Readers are Angela Clark and Eva Barnhill. Melvin was born on October 28, 1947 in Judice, LA to Roy Clark and Eva Mae Bourque Clark. He was the oldest of three boys. Melvin graduated from Judice High School and enlisted in the Army Reserve. He married Linda Alleman on November 3, 1968 and they made their home next door to his parents’ home. In March of 1970, they welcomed a daughter, Robin Colleen. Their second daughter, Jayna Mel, was born in January of 1974. He was employed by Gulf States/Entergy working his way up to Network Manager over the years and retired in 2003 after 35 years of service. Melvin enjoyed hunting, fishing, cooking, traveling with his family, getting together with family and friends and listening to Cajun/French music. He was an amazing cook and could be found stirring a pot often. He loved nothing more than cooking for friends and family. His jambalaya has definitely become famous over the years. Melvin was a wonderful man who always had a smile for everyone. He was quiet but quick witted, and always the first to offer a helping hand to anyone in need. Melvin always made sure everyone was taken care of especially his family. Above all, Melvin’s passion was his wife and family; "Papa" loved spending time with his children and grandchildren. He enjoyed taking his family on vacations and did so often. Papa rarely missed anything involving his three grandchildren who were his pride and joy. He loved them beyond measure and they adored him. Even after a morning of chemotherapy, he could be found in the afternoon at the baseball park watching Jackson and Alex play or driving Eva to music lessons. There is nothing he would not have done for those three grandchildren. Survivors include his wife of 52 years, Linda Alleman Clark, his daughter, Robin Clark Andrepont and her husband, Jim Andrepont and his daughter, Jayna Clark Barnhill. He is also survived by his grandchildren, Jackson Clark Andrepont, Alexander Rene Andrepont “Alex” and Eva Marie Barnhill, his mother, Eva Mae Clark, his brother, Dave Clark and his wife, Angela and several nieces, nephews, great-nieces, and great-nephews. He was preceded in death by his father, Roy Clark, his brother, Russell Clark, two foster brothers, Lawrence and Conrad Daspit, his in-laws, AJ & Augusta Alleman and his brother-in-law, Ted Alleman. Pallbearers are Jim Andrepont, Jackson Andrepont, Alex Andrepont, Dave Clark, Mabry Bourque, Donald Theriot, James Benoit, and Kerry Miguez. Honorary pallbearers are the many members of the Cabin Coffee Club. Donations in Melvin’s name can be made to Audubon Hospice Lafayette at 221 Rue De Jean Suite 201, Lafayette LA 70508 The family would like to thank Dr. Molly Thomas and staff at Ochsner Cancer Center of Acadiana and the staff of Audubon Hospice Lafayette, especially Lorna, Shawanna, LaQuinta, and Lynelle, for their compassion and care. All are welcome to join the family in a celebration of life after the service at Le Barn Rouge 831 Rue de Belier Lafayette LA 70506. Personal condolences may be sent to the Clark family at www.delhommefuneralhome.com.

Funeral services will be held on Thursday, August 26, 2021 at 3:00 PM at Delhomme Funeral Home in Scott, LA for Melvin John Clark, age 73, who passed away on Saturday, August 21, 2021 at his residence with family surrounding him after a lengthy... View Obituary & Service Information

The family of Melvin John Clark created this Life Tributes page to make it easy to share your memories.

Send flowers to the Clark family.