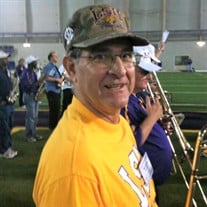 A Funeral Service will be held at 1:00 PM on Thursday, March 24, 2022 in Delhomme Chapel of the Flowers - Bertrand for Michael Joseph Boudreaux, 72, who passed away on March 19, 2022 at The Calcutta House of Lafayette. Reverend Gil Dutel will conduct the funeral services. Burial will take place in Lafayette Memorial Park Cemetery. Mike attended St. Aloysius and graduated from Catholic High in Baton Rouge. He obtained a BS Degree in Civil Engineering from LSU. While attending LSU he was a proud member of the Tiger Band. He played trombone with the LSU Alumni Band for well over 30 years. Mike also played with the Skyliners Dance Band, New Iberia Community Concert Band, New Iberia Swing Band, and the Eunice Community Concert Band and Choir. He began his lifelong career with Louisiana DOTD in 1972 as an Engineer Intern and retired in 2010 as the District Laboratory Engineer for District 03. Mike always enjoyed hunting, fishing, motorcycles, LSU tailgating, and spending time with family and friends, but his main passion was music. Mike, a resident of Lafayette, was the son of the late Joseph Boudreaux and the former Edith Fryoux. He is survived by his mother, Edith Fryoux Boudreaux; siblings, Rene' Boudreaux and wife, Diane, Carey Boudreaux and wife, Kitty, Roy Boudreaux and wife, Mary, Doris Dean and husband, Rickey, Warren Boudreaux and wife, Cindy, Edith Boudreaux and Gay Hebert, Rhett Boudreaux and wife, Leslie as well as numerous nieces and nephews. He was preceded in death by his father; siblings, Julie Boudreaux Barnett and Mark Boudreaux. The family requests that visiting hours be observed at Delhomme Funeral Home - Bertrand on Wednesday, March 23, 2022 from 11:00 AM to 8:00 PM. A Rosary will be recited at 6:00 PM on Wednesday evening in the funeral home. Visiting hours will continue on Thursday from 10:00 AM until the time of service. In lieu of flowers the family requests that donations be made to The Calcutta House at 105 St. Christopher St., Lafayette, LA, 70506. The family would like to thank the staff at The Calcutta House for showing such compassion and care. Personal condolences may be sent to the Boudreaux family at www.delhommefuneralhome.com. Michael Joseph Boudreaux and his family were cared for and entrusted final arrangements to Delhomme Funeral Home, 1011 Bertrand Drive, Lafayette, LA.

A Funeral Service will be held at 1:00 PM on Thursday, March 24, 2022 in Delhomme Chapel of the Flowers - Bertrand for Michael Joseph Boudreaux, 72, who passed away on March 19, 2022 at The Calcutta House of Lafayette. Reverend Gil Dutel will... View Obituary & Service Information

The family of Michael Joseph Boudreaux created this Life Tributes page to make it easy to share your memories.