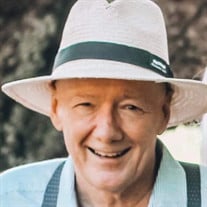 Graveside service will be held on Friday, April 3, 2020 in St. Michael's Catholic Cemetery for Michael Stanislaus O'Brien, 66, who passed away on March 16, 2020 at his home, surrounded by loved ones. Fr. Jason Mouton, Pastor of St. Martin De Tours, will conduct the graveside/internment service. Mr. O'Brien, a resident of Saint Martinville, was the son of the late James O'Brien and the former Rita Durand. Michael (Mike) Stanislaus O’Brien was born on November 29, 1953, in Lafayette, LA, as the only child of James and Rita (Merle) O’Brien, who preceded him in death. He is survived by his daughters, Nicole and Kaitlyn O’Brien, their mother, Jane Fleming O’Brien, and his wife, Mary Beth O’Brien. Additionally, he is lovingly remembered by his aunt, Suzanne Barras Durand, and his many wonderful first cousins whom he thought of as brothers and sisters. As a young man, Mike graduated from Central Catholic High School in Morgan City, LA. He then completed his education in New Orleans, LA, at Loyola University, where he obtained a Bachelor of Arts degree in Philosophy, Loyola Law School, where he obtained a Juris Doctor degree, and Tulane Law School, where he obtained a Master of Laws degree in Admiralty. Mike was a 40-year member of The Louisiana Bar, under which he practiced as an attorney in Lafayette and St. Martinville, LA, and the last 23 years of which he practiced with his partner, William L. Goode. Mike was an active member of the Attakapas Chapter of the LA Sons of the American Revolution and held the position of Chancellor. He was a devoted member of the St. Martinville Rotary Club and had the honor of serving as its President. He was also a devout Catholic and an active member of St. Martin de Tours Catholic Church in St. Martin Parish. His greatest joys in life included his daughters, movies, and ice cream. During his free time, Mike pursued his passion for the collection and restoration of antiques, especially horse-drawn carriages. On many Sundays, he could be found driving his beloved horses and buggies into the St. Martinville town square to attend church services. Pallbearers will be William Goode, Charles Durand, Sonny Durand, Stafford Mikell, Greg DeKeyzer and Benjamin Tackett. The family would like to thank his caregivers from Community Hospice, also the staff of Lourdes and UAMS, for their compassionate care in his time of need. Personal condolences may be sent to the O'Brien family at www.delhommefuneralhome.com. Delhomme Funeral Home, 1011 Bertrand Drive, Lafayette, LA is in charge of funeral arrangements.

Graveside service will be held on Friday, April 3, 2020 in St. Michael's Catholic Cemetery for Michael Stanislaus O'Brien, 66, who passed away on March 16, 2020 at his home, surrounded by loved ones. Fr. Jason Mouton, Pastor of St. Martin De... View Obituary & Service Information

The family of Michael Stanislaus O'Brien created this Life Tributes page to make it easy to share your memories.

Send flowers to the O'Brien family.