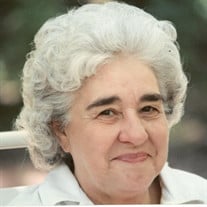 A Graveside Service will be held at 1:00 pm on Wednesday, March 18, 2020, at Holy Mary Mother of God Cemetery for Mona Gaudin, 93, who passed away on Sunday, March 15, 2020. Reverend Cedric Sonnier, Pastor of Holy Mary Mother of the Church Catholic Church, will conduct the service. Mrs. Mona Gaudin was born in New Orleans, Louisiana. She married Robert S. Gaudin in 1946. Mona was called Mama by her 16 children, and Grandma by her grandchildren and great-grandchildren. She was a caregiver, friend, and a woman of faith. She had a heart of gold and somehow knew how to make everyone feel like they were her “favorite.” Her faith in God was a testament of her undeniable love for Jesus. She has touched the lives of so many with her smile, her advice and her caring touch. Her door was always open and when it was time to leave, she always said, “Come back to see me.” She taught us so many life lessons and we will be eternally grateful for her wisdom and unconditional love. Mona was preceded in death by her parents, Arlie J. Lapeyrolerie and Aline Michel Lapeyrolerie; her husband, Robert Simon Gaudin, Sr.; her siblings, Neava Yentzen, Joseph Arlie (Buster) Lapeyrolerie, and Stanford Lapeyrolerie and her daughter, Aline Ann Gaudin. Mona is survived by her sisters, Ula Perez and Ina Brownlow; her children, Robert S. Gaudin, Jr., Kathy Gaudin, Walter Gaudin, Carol Guillot (Marshal), Avery Gaudin (Odette), Ramona Bell (Phil), Derald Gaudin, Stanley Gaudin (Lana), Maureen Gaudin, Donna Nassans (Louis), Denise Gaudin, Celia Lenox (Greg), Kyra Votaw (Charley), Charlotte Doyle (Gene), and Norris Gaudin (Jeni); thirty-one grandchildren and twenty-six great-grandchildren. The family requests that visiting hours be observed at Delhomme Funeral Home - Bertrand on Wednesday, March 18, 2020, from 9:00 am to 12:00 pm. A Rosary will be recited at 11:30 am in the funeral home. The family would like to thank Heart of Hospice for their loving care and support. In lieu of flowers, the family requests that donations be made in Mona’s memory to Heart of Hospice, 1100 Bertrand Drive, Suite A, Lafayette, LA 70506. Personal condolences may be sent to the Gaudin family at www.delhommefuneralhome.com. Delhomme Funeral Home, 1011 Bertrand Drive, Lafayette, LA is in charge of funeral arrangements.

The family of Mona Gaudin created this Life Tributes page to make it easy to share your memories.

A Graveside Service will be held at 1:00 pm on Wednesday, March...

Send flowers to the Gaudin family.