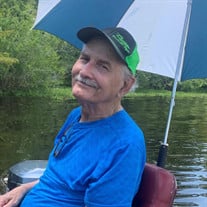 Funeral Services will be held at 1:00PM on Friday, September 25, 2020 at Delhomme Funeral Home for Nolan Joseph Chiasson, 75, who passed away on September 19, 2020 at the house he built with his father on the beautiful Atchafalaya Basin. Deacon Cody Miller will conduct the funeral service. Interment will follow in Calvary Cemetery. Nolan was born Friday, May 4, 1945 in Youngsville, LA to the late Joseph Chiasson and the former Viola Gaspard. He grew up in Lafayette, Louisiana then lived the remainder of his life in Butte La Rose. A Northside High School graduate, Class of 1964 , he enlisted in the US Army in 1966 and was stationed in Anchorage Alaska during Vietnam. He proudly served his country and was honorably discharged in 1975. After returning from Alaska, he worked in the oilfield as a mechanic, for his parents at their hotel & restaurant, and eventually opened his own car dealership, Action Auto Sales, where he continued to work until his passing. He was very charismatic, made many friends, and did well in the automotive industry. Although Mr. Chiasson spent most of his time in Lafayette, he found peace in Butte LaRose. Having the pleasure of living on the water warmed his heart. He made sure to have squirrel and hummingbird feeders filled and fish food stocked for the wildlife to enjoy. He loved hunting, fishing, motorcycles, and classic cars. He could often be found at the pool hall showing off his skills, and there are plenty of trophies from around the country to prove it! Over the last three years, he battled an illness and fought valiantly to live his life. He still enjoyed going to auctions and car shows, as well as spending time talking with his friends for hours about the “ole days.” He grew closer to his family during that time and often said how lucky he felt to be alive. Mr. Chiasson was proud of his daughters and often told them how much he loved them. With his daughter Brandi, he enjoyed going on hunting trips and listening to Elvis and K-Bon; with his daughter Michelle, he would listen to his “buddy” Joel Osteen in the car, and he accepted Jesus to be his Lord and Savior before he died. He is survived by his daughters, Michelle Chiasson and fiancé Brent Descant; Brandi Chiasson and fiancé Dustin Robin; grandchildren, Hailey Meche and Alexander Robin; and extended family. He was preceded in death by his parents, Joseph and Viola Chiasson; and brother, Kevin Chiasson. The family requests that visiting hours be observed at Delhomme Funeral Home - Bertrand on Thursday, September 24, 2020 from 10:00AM to 8:00PM. A Rosary will be prayed at 6:30 PM on Thursday evening. Visiting hours will continue on Friday from 9:00AM until the time of service. Pallbearers will be Brent Descant, Dustin Robin, Josh Chiasson, T-Pat Lavergne, Bobby Short, and Mark Bonin. Personal condolences may be sent to the Chiasson family at www.delhommefuneralhome.com. Delhomme Funeral Home, 1011 Bertrand Drive, Lafayette, LA is in charge of funeral arrangements.

Funeral Services will be held at 1:00PM on Friday, September 25, 2020 at Delhomme Funeral Home for Nolan Joseph Chiasson, 75, who passed away on September 19, 2020 at the house he built with his father on the beautiful Atchafalaya Basin. Deacon... View Obituary & Service Information

The family of Nolan J. Chiasson created this Life Tributes page to make it easy to share your memories.

Funeral Services will be held at 1:00PM on Friday, September...

Send flowers to the Chiasson family.