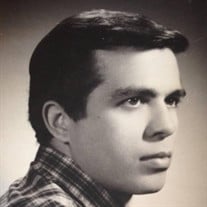 A Private Memorial Service will be held for Orlando "Carlos" Adelio Mendoza, 78, who passed away on September 6, 2021. Deacon Cody Miller will conduct the funeral services. Carlos, a long-time Catholic and resident of Lafayette, was the son of the late Adelio Mendoza and the former Maria Dominguez. Born and raised in Asuncion, Paraguay, Carlos even played semi-professional futból and studied law before leaving for the States. As a first generation American, Carlos received his citizenship in the early 1970s and promptly entered the Oil & Gas industry. For 40 years, he was a well-respected contributor to the Oil & Gas industry, both domestic and international. Carlos was multi-lingual, which afforded opportunities across the world. Though he traveled the world, Carlos loved Lafayette, LA. He was an avid supporter of Ragin Cajun football, the LSU Tigers football, University of Alabama football and the Saints; however, Carlos' passion was always soccer. Nothing gave him more pride than to watch Maria, Ana, and Ruben compete. The best of him will continue to live on with the lives of his family. He is survived by his wife of 34 years, Katy Sue Gatte Mendoza; daughters, Maria Mendoza Landreth (Jonathan) and Ana Mendoza Merz (Micah); son, C. Ruben Mendoza; granddaughters, Mia Merz and Presley Merz; grandsons, Grant Landreth and Mason Landreth; sister, Graciela Mendoza Gonzalez (Leo); and brothers, Milciades Mendoza and Salvador Mendoza. He was preceded in death by his first wife, Shirley Sims Mendoza; parents, Adelio and Maria Mendoza; and an infant brother. Personal condolences may be sent to the Mendoza family at www.delhommefuneralhome.com. Delhomme Funeral Home, 1011 Bertrand Drive, Lafayette, LA is in charge of funeral arrangements

A Private Memorial Service will be held for Orlando "Carlos" Adelio Mendoza, 78, who passed away on September 6, 2021. Deacon Cody Miller will conduct the funeral services. Carlos, a long-time Catholic and resident of Lafayette, was the son... View Obituary & Service Information

The family of Orlando "Carlos" Adelio Mendoza created this Life Tributes page to make it easy to share your memories.

A Private Memorial Service will be held for Orlando &quot;Carlos&quot;...

Send flowers to the Mendoza family.