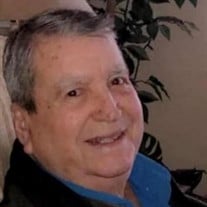 Funeral Services will be held at 11:00 AM on Saturday, October 9, 2021 in Delhomme Chapel of the Flowers for Paul Nelson Lantier, 87, who passed away on October 5, 2021. Burial will take place in Lafayette Memorial Park Cemetery. Mr. Lantier, a resident of Scott, was the son of the late Maurice Lantier, Sr. and the former Alice Maitre. Nelson was an avid fisherman who still holds the Big Bass record with the Christian Fellowship of Bass Anglers. He was a retired Engineer with Southern Pacific Railroad with 43 years of faithful service. Nelson enjoyed traveling with his granddaughters and watching them play softball. He was affectionately known as "Paw Paw" to all of the players and teammates. Nelson enjoyed watching his grandsons, who played Basketball and Baseball. He and his friends met on a frequent basis at the Coffee Depot in Scott to solve the World's problems. Nelson never met a stranger, was loved by many, and will be deeply missed. He had an impact on others that he didn't realize. He is survived by his daughter, Janell Lantier Doucet and her husband, Chad; son, Andre Lantier and his wife, Dina; grandchildren, Skye Romero, Baileigh Meche, Jocy Doucet, Courtney Lantier, Grace Ann Doucet, Caitlan Lantier, Mima Doucet, Brennan Lantier, Aiden Doucet, and Bryson Lantier; great grandchildren, Maddyn Doucet, Parker Lantier, River Doucet, Miley LeBlanc, Lucas LeBlanc, and Graham Romero and one sister, Rita Billeaud and husband, John. He was preceded in death by his parents; wife, Janet Mead Lantier; siblings, Joseph Paul Lantier, Emick Lantier, Wilson Lantier, Maurice Lantier, Jr., Lula Mae Fabre, and Rhena Bergeron. The family requests that visiting hours be observed at Delhomme Funeral Home - Bertrand on Friday, October 8, 2021 from 4:00 PM to 10:00 PM. Visiting hours will continue on Saturday from 8:00 AM until the time of service. Personal condolences may be sent to the Lantier family at www.delhommefuneralhome.com. Delhomme Funeral Home, 1011 Bertrand Drive, Lafayette, LA is in charge of funeral arrangements

Funeral Services will be held at 11:00 AM on Saturday, October 9, 2021 in Delhomme Chapel of the Flowers for Paul Nelson Lantier, 87, who passed away on October 5, 2021. Burial will take place in Lafayette Memorial Park Cemetery. Mr. Lantier,... View Obituary & Service Information

The family of Paul Nelson Lantier created this Life Tributes page to make it easy to share your memories.

Funeral Services will be held at 11:00 AM on Saturday, October...

Send flowers to the Lantier family.