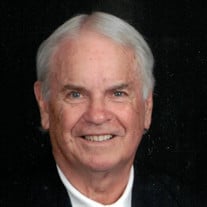 After a two-year battle with cancer, it is with a heavy heart, we say goodbye to Paul Wayne “Bat” Masterson, who peacefully passed away on June 23, 2020, surrounded by his loving family. He was a devoted husband, father, grandfather, and friend. He moved his family to Lafayette, Louisiana in 1970 and made it his home. He enjoyed a successful 45-year career in the oil industry where he made friends for life. He was a member of Oakbourne Country Club, The Petroleum Club, and Red Lerilles. He was a member of Asbury United Methodist Church for the past 50 years. He had a passion for Nebraska Football which was evident by his wardrobe. He was lucky enough to play with his regular golf group for over 30 years. He loved the friendly competition and camaraderie on the golf course. His philosophy was that “You always make your bet on the first tee,” and you need to “throw them a little seed corn, to keep them coming back.” He was born on September 5, 1935 in Jackson, Missouri. He was the son of the late Benjamin Masterson, Eva Fern Medley, and Vincent Wissman. He was a star athlete in high school and excelled in football and basketball. He was selected to play in the state all-star football game. After graduation in December 1953, he enlisted in the Army and served his time in Korea. Upon his return, he attended Southeastern Missouri State University and later moved to Atchison, Kansas. It was here that he met the love of his life, Jeanette Marlene Kirkland. They were married on August 2, 1958. He spent the last several years caring for his wife, Jeanette, who is battling Alzheimer’s. He was with her daily and always made sure she had the highest level of care. He is survived by his wife of 61 years; Jeanette Kirkland Masterson; children, Mitchel Wayne Masterson (Anna), Houston, Texas, Stacy Masterson Turk (Ron), Nashville, Tennessee; grandchildren, Drake Masterson, Austin Turk, Natalie Turk, and Greer Masterson; siblings Robert Masterson, Steven Wissman, (Jan), Mike Wissman, (Kay) and Russ Wissman and numerous nieces and nephews. He was preceded in death by his parents, Benjamin Masterson, Eva Fern Medley, and Vincent Wissman; and sister Ann Wissman Ford. The family requests that visiting hours be observed at Delhomme Funeral home on Saturday, June 27, 2020, from 1:00 p.m. till 3:00 p.m., with services at 3:00 p.m. The services will be officiated by Susan Ferguson, Associate Pastor, Asbury Methodist Church. The family wishes to express their sincere appreciation to Dr. Michael Cain and his entire staff at the Cancer Center of Acadiana and the loving staff of Bridgeway Healthcare and Hospice. In lieu of flowers, donations can be made to St. Jude Children’s Hospital or Alzheimer’s Association. The family wishes that you share their Dad’s legacy of spreading kindness and joy every chance you get. Give without hesitation. Take care of one another and leave footprints of love and kindness wherever you go. Personal condolences may be sent to the Masterson family at www.delhommefuneralhome.com. Delhomme Funeral Home, 1011 Bertrand Drive, Lafayette, LA is in charge of funeral arrangements.

After a two-year battle with cancer, it is with a heavy heart, we say goodbye to Paul Wayne &#8220;Bat&#8221; Masterson, who peacefully passed away on June 23, 2020, surrounded by his loving family. He was a devoted husband, father, grandfather,... View Obituary & Service Information

The family of Paul "Bat" Masterson created this Life Tributes page to make it easy to share your memories.

After a two-year battle with cancer, it is with a heavy heart,...

Send flowers to the Masterson family.