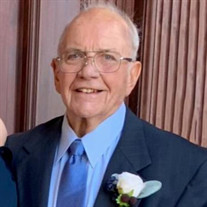 A Mass of Christian Burial will be held at 10:00 AM on Wednesday, November 3, 2021 in St. Pius X Catholic Church for Phillip Gordon Coreil, 81, who passed away on October 29, 2021. Rev. Fr. James Brady, Pastor of St. Pius X Catholic Church, will be Celebrant of the Mass and will conduct the funeral services. Rev. Msgr. J. Douglas Courville, Pastor of St. Stephen Catholic Church of Berwick, will serve as Co-Celebrant of the Mass and the funeral services. Burial will take place in Greenlawn Memorial Gardens Cemetery. Gordon, a long-time resident of Lafayette, was the son of the late Moise Coreil and the former Judith Billeaud. Born and raised in Ville Platte, he graduated from Sacred Heart and played football at SLI, until his sophomore year. Gordon transferred and graduated from George Washington University in D.C. After returning home, he was instrumental in starting the football program at Teurlings Catholic High. Gordon impacted many during his years of coaching at Teurlings and Lafayette High. Ultimately, he left coaching to manage restaurants for the Michot family. From Burger Chef to Mr. Cook, Gordon oversaw all operations for over 50 locations. He eventually left all this behind to join Our Lady of Lourdes Hospital executive management team. Gordon was an avid fisherman and devoted family man, passions he passed along to his children. He is survived by his children, Denis Gordon Coreil, Caroline Coreil Roy, and Charles "Chuck" Coreil and his wife Teresa; grandchildren, Ryan Coreil, Cory Coreil and his wife Kayla, Julia Coreil, Michael Roy and his wife Kelsey, Victoria Roy, Luke Coreil, Aaron Coreil and Kate Coreil; and great-grandchildren, Christopher Roy and Emma-Grace Roy. He was preceded in death by his wife of 54 years, Denise Mouton Coreil; parents, Moise and Judith Coreil; sister, Sr. Judith Dayle Coreil, MSC; and brother, Eugene Coreil. The family requests that visiting hours be observed at St. Pius X Catholic Church on Wednesday, November 3, 2021 from 8:00 AM until the time of service. Pallbearers will be D. Gordon Coreil, Charles "Chuck" Coreil, Michael Roy, Cory Coreil, Ryan Coreil, Aaron Coreil, Luke Coreil, and David Romero. The family would like to thank the staff and nurses of NSI (Nursing Specialties Hospice) for their compassionate care, during the family's time of need. Personal condolences may be sent to the Coreil family at www.delhommefuneralhome.com. Delhomme Funeral Home, 1011 Bertrand Drive, Lafayette, LA is in charge of funeral arrangements.

The family of Phillip Gordon Coreil created this Life Tributes page to make it easy to share your memories.

Send flowers to the Coreil family.