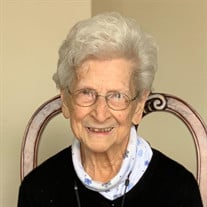 Phyllis Mouledous Wetzel entered eternal life on October 18, 2020. Phyllis was born on January 31, 1926 in New Orleans, LA to parents Philip Mouledous, Sr. and Helen Byrne. She was a graduate of Sophie B. Wright High School in New Orleans and worked for the telephone company following school. She married Thomas D. Wetzel, Sr. and resided in Metairie, LA until 2008. Following Hurricane Katrina, Phyllis and Tom moved to Lafayette, LA where they resided for the remainder of their lives. Phyllis was a devout Catholic, attending daily mass and ensuring that each of her seven children attended Catholic grade school and high school. Their home on Ridgelake Drive was a popular gathering place for their many friends and relatives. Phyllis was the consummate party planner, a wonderful cook, and devoted mother and grandmother. Phyllis is preceded in death by her parents, her beloved husband, Tom, daughter Kim Wetzel Starnes (Richard), and brother Dr. Shelley Mouledous (Josie). She is survived by her brother Philip Mouledous, Sr. (Elaine), her children Thomas D. Wetzel, Jr. (Beth), Gary S. Wetzel (Debbie), Shelley A. Wetzel (Michaelle), Joel Sherrell (Jesse), Barbara A. Wetzel, and Paul J. Wetzel (Charlene). Phyllis is also survived by her grandchildren Todd Wetzel (Elisabeth), Raegan Gupta (Shalinder), Shelley Smith (Danny), Scott, Kerrie, and Carmen Wetzel, and Elizabeth Lee Gernert, as well as great grandchildren Jack Wetzel, Kush,Lalam and Sai Gupta and Tom and Nate Smith. A private service and burial will be held at Delhomme Funeral Home Chapel in Maurice, LA. Followed by a public celebration of Phyllis’ life at a later date. The family wishes to thank the staff of Garden View Assisted Living for their loving care of her over the past four years as well as the staff of The Carpenter House of St. Joseph Hospice who cared for her during her final week. They would also like to thank Dr. Lainie Moncada who served as family physician for both Tom and Phyllis, for her devotion to their wellbeing and happiness. The family would like to acknowledge Gayle Goodyear (niece) for her generosity to Tom and Phyllis over the years. Expressions of Sympathy may be made to The Carpenter House of St. Joseph Hospice, 923 W. Pinhook Road, Lafayette LA 70503. Personal condolences may be sent to the Wetzel family at www.delhommefuneralhome.com. Delhomme Funeral Home, 200 Chief H. Fred Road, Maurice, LA, is in charge of funeral arrangements.

The family of Phyllis Mouledous Wetzel created this Life Tributes page to make it easy to share your memories.

Send flowers to the Wetzel family.