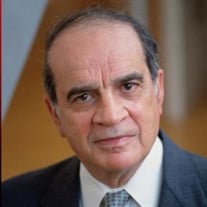 Former president of the University of Louisiana Lafayette, Dr. Ray P. Authement passed away on April 5, 2020 after an extended illness. Dr. Authement was at his home in Lafayette with his beloved wife Barbara at his side. Born on Nov. 19,... View Obituary & Service Information

The family of Dr. Ray P. Authement created this Life Tributes page to make it easy to share your memories.

Former president of the University of Louisiana Lafayette, Dr....

Send flowers to the Authement family.