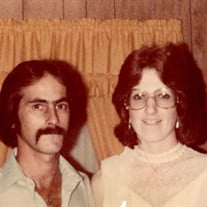 A Catholic Service will be held at 1:00 PM on Saturday, November 21, 2020, at the Delhomme Funeral Home Chapel in Scott for Ray Allen Leger, 66, who peacefully passed away on Wednesday, November 18, 2020, at the Carpenter House of St. Joseph Hospice. Deacon Art Bakeler will officiate the funeral services. Entombment will take place in the Sts. Peter & Paul Mausoleum immediately following the service. An urn of Lynn’s cremated remains will be placed in Ray’s arms so that they can be entombed together for eternity. Ray was born in Lafayette and was a long-time resident of Scott, where he graduated from Acadiana High School. At one point in his life, he worked for his father, who was his best friend. He loved collecting and playing guitars, enjoyed shooting his western pistols and reloading his own bullets. He met his wife and the love of his life, Lynn, at Mayfair Windows, where they both worked. They married and settled down in Scott, where they resided for 37 years until her death in August of 2019. Ray mourned her passing until the day he died. Ray is survived by his son, Justin Leger and his wife Rachael, of Carencro; his mother, Irene Leger; 2 brothers, Michael Leger and his wife Judy, and Terry Leger; 4 sisters, Susan Splawn and her husband Tim, Vickie Leger, Christine Bourgeois and her husband Jim, and Cindy Pothier and her husband Michael; 2 granddaughters, Kirstie Leger and Bailey Leger; and a great-grandson, Collin Hester. He is preceded in death by his wife, Linda "Lynn" Lavergne Leger and his father, Johnny Leger. Lynn is survived by one stepson, Justin Leger and his wife Rachael, of Carencro; one sister, Ruby Richard and her husband Shelton Sr., of Scott; two brothers, Calvin Lavergne, of Cankton, Darrell Lavergne and his wife Cherie, of Carencro; one brother-in-law, Mason Stelly, of Mire; two sisters-in-law, Melinda Lavergne, of Breaux Bridge and Norma Lavergne, of Mire; two godchildren, Angelina Cecile Lavergne and Angela Lavergne and numerous dear nieces, nephews and friends. She was preceded in death by her parents, Ovelian Joseph and Angelina Marie Menard Lavergne; one sister, Gloria Stelly; three brothers, Ronald, Horace and Willis Lavergne; a sister-in-law, Jacqueline "Jackie" Lavergne and a niece, Rachel Lavergne. The family requests that visiting hours be observed at Delhomme Funeral Home – Scott on Saturday, November 21, 2020, from 9:00 AM until the time of service. A Rosary will be recited at 11:00 AM in the funeral home. In lieu of flowers, a donation may be made in Ray and Linda’s name to St. Joseph Hospice of Acadiana at 923 W Pinhook Rd, Lafayette, LA 70503 or to a charity of your choice. The family would like to thank The Carpenter House of St. Joseph Hospice. It was truly a blessing to have a hospice facility that showed such comfort and compassion in the final days of Ray’s life. Thanks are also expressed to Mary Broussard for watching over Ray in his time of need. Lastly, thank you to Delhomme Funeral Home for making it so easy for Justin in such a difficult time. Personal condolences may be sent to the Leger Family at www.delhommefuneralhome.com. Delhomme Funeral Home, 705 Marie Street, Scott, LA, is in charge of arrangements.

A Catholic Service will be held at 1:00 PM on Saturday, November 21, 2020, at the Delhomme Funeral Home Chapel in Scott for Ray Allen Leger, 66, who peacefully passed away on Wednesday, November 18, 2020, at the Carpenter House of St. Joseph... View Obituary & Service Information

The family of Ray & Linda Leger created this Life Tributes page to make it easy to share your memories.

A Catholic Service will be held at 1:00 PM on Saturday, November...

Send flowers to the Leger family.