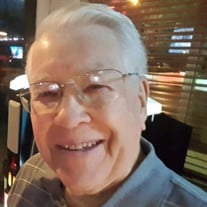 Memorial Services will be held for Richard Lee Cook, 92, who passed away on March 17, 2021. Inurnment will take place in Lafayette Memorial Park Mausoleum. Mr. Cook, a resident of Lafayette, was the son of the late Harvey Cook and the former Tressa Parrish. In his 92 years, Richard experienced and accomplished so many things. His positivity and humor opened many a door for him and earned him lifelong friends, the world over. Richard, who often went by ‘Dick,’ wore a smile as a rule and was always ready to amuse himself and others with witty remarks. His career provided him the opportunity to live and travel around the globe which, in turn, provided him a life-long love of and respect for many cultures. It was commonplace to hear him use idioms and phrases from Thai, Dutch, Laotian and other languages. His hobbies included tennis and duplicate bridge. Richard’s many years in the bridge studio earned him Life Master status. He was known for his immutable sense of humor, often wearing amusing outfits with emphasis on a wide variety of silly hats. Richard’s dedication to his wife, Jean, and family were unparalleled. He was a care-taker, problem solver, and friend to all who knew him. Though Richard is no longer with us, his warm legacy will not be soon forgotten by this world. He will be fondly remembered and incredibly missed. He is survived by his wife of 69 years, Jean Meeker Cook; son, Richard J. Cook (Christine); daughter, Lori Cook Comeaux (Michael); daughter, Toni B. Cook (Martin); and grandchildren, Jenifer Bordelon and Ryan Bordelon. He was preceded in death by his daughter, Jina L. Cook; parents, Harvey and Tressa Cook; and sister, Dorothy C. Maddox. In lieu of flowers, the family requests that donations be made in Richard's memory to Miles Perret Cancer Services and Acadiana Animal Aid. Personal condolences may be sent to the Cook family at www.delhommefuneralhome.com. Delhomme Funeral Home, 1011 Bertrand Drive, Lafayette, LA is in charge of funeral arrangements.

Memorial Services will be held for Richard Lee Cook, 92, who passed away on March 17, 2021. Inurnment will take place in Lafayette Memorial Park Mausoleum. Mr. Cook, a resident of Lafayette, was the son of the late Harvey Cook and the former... View Obituary & Service Information

The family of Richard Lee Cook created this Life Tributes page to make it easy to share your memories.

Memorial Services will be held for Richard Lee Cook, 92, who...

Send flowers to the Cook family.