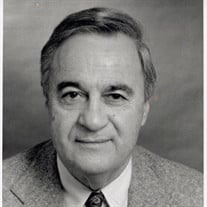 A Mass of Christian Burial will be held at 3 p.m. Monday, Jan. 24, 2022, at St. John the Evangelist Catholic Church in Lafayette for Richard E. D’Aquin Sr., 94, who died peacefully at his home in Lafayette on Saturday, Jan. 22, 2022. A wake will be held at the church at 1 p.m., followed by the Rosary at 2 p.m. Rev. Fr. Chester Arceneaux will be Celebrant of the Mass and will conduct the funeral services. Pallbearers are his grandsons David D’Aquin, Richard E. D’Aquin III, Elliott Grissom, Matthew Grissom, Scott Grissom and Stephen Grissom. Honorary pallbearers are B.I. Moody, Richard Zuschlag, Carol Lafleur, Linda Thomas, and the surviving members of the Friday Lunch Bunch, Greg Poteet and Dr. James Reeves. Delhomme Funeral Home is in charge of arrangements. Richard is survived by his son, Richard D’Aquin Jr., and two daughters, Deborah (Ken) Grissom, Ann (Mark) Derise, all of Lafayette; 11 grandchildren, and 13 great-grandchildren. He was preceded in death by his wife, Beverly Mayeux D’Aquin; his parents, Edmond D’Aquin Sr. and the former Louise D’Aquin, both of New Orleans; two brothers, Edmund D’Aquin Jr. of Crowley, and Robert D’Aquin of Lake Arthur; a sister, Catherine Williams of Lafayette. Richard—who was lovingly known by different generations as “Dick,” “Doc,” “Papa Doc,” and simply “P.D.”—was born to Edmond and Louise D’Aquin on July 27, 1927, in Iota. Richard was a leader in Lafayette’s community affairs for the better part of a century, serving as publisher of The Daily Advertiser for 33 years, and sitting on numerous boards and committees in both government and civic life. A Korean War veteran—and at one time the youngest commissioned officer in the U.S. Army—Richard retired as a lieutenant colonel in the U.S. Army Reserve. And he was a businessman, owning several community newspapers and chairing the Acadiana Marketing and Publishing Group for Thomson Newspapers Inc. after his retirement from The Daily Advertiser. He was also on the board of directors of First National Bank for decades, as well as the BankOne Advisory Board. Richard began his newspaper career 70 years ago as an advertising salesman for the Advertiser. In 1954, Richard was named editor and publisher of The Rayne Acadian Tribune and Church Point News, weekly newspapers owned by the Murphy Newspaper chain, which also owned The Advertiser. He was named publisher of the Lafayette newspaper in 1962 when Thomson Newspapers purchased The Daily Advertiser, a position he held until his retirement on Dec. 31, 1995. As a daily newspaper publisher, Richard was one of the first community leaders to recognize and voice the concept that what is good for Acadiana is good for Lafayette, and vice versa. Early-on in the job, he adopted for The Advertiser the motto “Dedicated to making Acadiana a better place to live.” He was instrumental in fostering the creation of an Acadiana Caucus in the Louisiana Legislature, and he put his influence behind such far-reaching developments as the Cajun Dome, first-rate ambulance service, and even an ice hockey venue. For the less fortunate, Richard created The Daily Advertiser Milk Fund and The Daily Advertiser Helpline. Through The Daily Advertiser’s “Action Corner,” another Richard D’Aquin innovation, the newspaper addressed numerous mundane albeit important civic issues from drainage to garbage pickup to street lighting. In his decades-long service to the Greater Lafayette Chamber of Commerce, Richard served three terms on the Chamber’s board of directors, was on the executive committee and served as vice president. He was active in the United Way, working in all capacities from solicitor to president, at which he served two terms. Richard was recipient of the 1969 Lafayette Civic Cup Award. He received the Monsignor Sigur Award at the 1995 Bishop’s Charity Ball and was King of the 1996 Bishop’s Charity Ball. Richard was a charter member of the Southwest Louisiana Education and Referral Center (232-HELP) and served five terms as president of that organization. He was also president of the Southwest Louisiana Education Foundation. Richard served on the Louisiana State Board of Education for three years, serving as vice president and a member of the executive committee. He was a charter member of the Louisiana Board of Regents, on which he served for over three decades, including as chairman for four years, a member of the executive committee, and secretary to the board. He served a four-year term on the Judiciary Commission for the State of Louisiana, and was a member of the Federal Public Defender Merit Selection Committee and the Governor’s Military Advisory Commission. Richard served as either president, a member of the board of directors, or of the executive committee on the following organizations: USL Century Club, USL Foundation, Lafayette Downtown Development Authority, Downtown Development Parking Commission, Leadership Lafayette, Visions Lafayette, Lafayette Humanitarian Awards, Lafayette Safety Council, Junior Achievement, PAR Board of Trustees, Louisiana Educational TV Authority, LAGCOE. Louisiana Lung Association, HCA Cypress Hospital, Southwest Louisiana Education Foundation, and SLEMCO Foundation. He was a member of the Lafayette Rotary Club and served as chairman and vice chairman of the Lafayette Civic Cup Recipients Club. An LSU graduate with a BA in Journalism, Richard served two years as president of the Louisiana Daily Newspapers Association, and two terms on the board of directors of the Louisiana Press Association. While at LSU, he was on the varsity baseball and boxing teams, and he was a member of the “L” Club. The family requests that in lieu of flowers, donations can be made in his memory to Hospice of Acadiana. Special thanks to Joeann Harrington of Hospice of Acadiana, and caregivers Darnell Bufford, and Annette Cashat.

The family of Richard E. D'Aquin Sr. created this Life Tributes page to make it easy to share your memories.

Send flowers to the D'Aquin family.