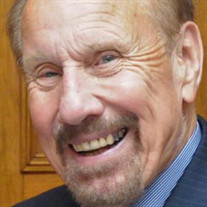 Richard Matas Prevost passed away peacefully at home on June 17, 2020, after a long battle with COPD. Born September 14, 1930, he was fully cognizant to the end, and was looking forward to celebrating his 90th birthday later this year. He is survived by four of his seven children: daughters Debbie Brooks and Jamie Kaner, and sons Tom Prevost and John Prevost. He was greeted in heaven by three sons who preceded him in death: Ricky, Chuck and Bobby. He was also preceded in death by his two brothers Myron and Charles, and is survived by their widows Malise and Amelia as well as several beloved daughters-in-law, sons-in-law, grandchildren, nieces and nephews. In this year when travel and gatherings are severely limited by the covid-19 pandemic, we deeply regret that we are unable to invite friends and family to a service to honor his life, due to family medical restrictions. Instead, we offer the rest of this announcement as a eulogy, and we invite everyone to post their memories of our dad on the Delhomme web page for his obituary. We are planning a memorial service in 2021, covid-19 permitting. Our dad was a talented entrepreneur who successfully established and managed eight credit bureaus from 1958-1988, four employment agencies from 1966-1981, and an office supply company in 1980. A visionary way ahead of his time, he also created a data processing center in 1972. He was a well-respected businessman who took pride in his honesty and integrity. When he gave his word, he kept it. His company philosophy included the sentence “It’s our conviction that the pursuit of excellence is our way of life.” To that end, he never quit or gave up on anything that he started. He was faithful and honorable in business and in life. In addition to his many businesses, it was his privilege to serve his community with the Associated Credit Bureaus state, regional and national groups. He won their International Achievement Award in 1964. He was also a devoted Rotary Club member for many years and served as the chapter president in Lafayette in 2008. He wholeheartedly loved his dogs! He had several beloved fur children over the years. His precious terrier named Pepper was at his side the morning he passed. Dad also loved his beautiful home which he designed, and he took great pride in his gorgeous garden which won Garden of the Month twice in the loving care of his incredibly talented gardener, Ruben. More than anything, our dad loved life. He loved to dance, travel and explore new places, read books, watch movies, and trade stories with friends and family. He lived an exuberant life. His final wish, expressed to his children often and most recently a few days before he passed, was that no one would “boo-hoo” about his passing. Instead, he hoped we kids would take a cruise together to celebrate his very good life and sprinkle his ashes in the ocean. We will do that as soon as it’s safe to cruise again! Dad said recently that when God saw fit to take him home, he would be leaving this planet peacefully and with no regrets. It’s a rare person who can say that, and we are grateful to have had the privilege of sharing a lifetime with him. We are also deeply grateful to all his caregivers, most especially to Dena who took great care of Dad seven days a week, was a dear friend to him the last two years and brought him joy every day, and to Heart of Hospice and especially nurse Amber whom he trusted and enjoyed seeing every week. For those who want to honor our dad in some way, we would appreciate donations to the Heart of Hospice Foundation in his name. See https://www.heartofhospicefoundation.net/. With great love, Debbie Brooks, Jamie Kaner and Tom Prevost

Richard Matas Prevost passed away peacefully at home on June 17, 2020, after a long battle with COPD. Born September 14, 1930, he was fully cognizant to the end, and was looking forward to celebrating his 90th birthday later this year. He... View Obituary & Service Information

The family of Richard Matas Prevost created this Life Tributes page to make it easy to share your memories.

Richard Matas Prevost passed away peacefully at home on June...

Send flowers to the Prevost family.