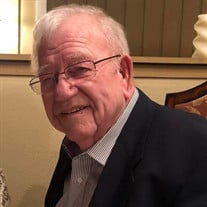 Robert Lee Butler, Sr., 87, passed away on April 22, 2021 at home surrounded by family after a lengthy battle of cancer. He was born on January 21, 1934 to Jake Butler, Sr. and Pauline Lucherk Schiel in Stafford, Texas. He joined the US Navy in 1952 and after completing Basic Training in San Diego he was shipped to Guam, then to Okinawa where he was in charge of sending and receiving messages using International Morse Code. It was in July of 1952 that he married the love of his life, Norma Lee Songy. Together they raised 5 children. Family was everything to daddy. After military service, he went to work in the oilfield and learned everything he could. He was a true entrepreneur. In 1967, he started with Hub City Industries. He had over 60+ years of Oilfield Knowledge & Experience. He truly never really retired. Survivors include his beloved wife of 68 years, Norma L. Butler; 3 daughters: Donna Meche (Barry), Rhonda Butler, Dana Trahan (Tony) and one son, Dean Butler (Debbie). Six grandchildren: Mia Robinson (Jeff); John R. Day; Simone E Sanchez (Victor); Mimi Trahan; David Trahan (Jennifer); Lilly Butler. Seven great grandchildren: Jake & Luke Robinson, Alexis Day, Julian & Noah Sanchez, Kambree & Rylan Trahan. Two siblings and their spouses: Betty Borel (Forrest) and Billy Butler (Rosie). He was preceded in death by his parents; 1 son Robert L. Butler, Jr. (BooBoo); one brother Jake Butler, Jr. and one sister Helen Butler. As per Daddy’s wishes there will be no services. (He asked us to celebrate his life & memory privately). He asked for his ashes to be included in with moma’s at her passing. Special thanks to Lindsey with Hospice of Acadiana who cared for daddy with the utmost care. The family requests that if you wish to honor his memory, donations can be made to Hospice of Acadiana, 2600 Johnston St, Lafayette La 70503 and St Jude. Personal condolences may be sent to the Butler family at www.delhommefuneralhome.com. Delhomme Funeral Home, 1011 Bertrand Drive, Lafayette, LA is in charge of funeral arrangements.

Robert Lee Butler, Sr., 87, passed away on April 22, 2021 at home surrounded by family after a lengthy battle of cancer. He was born on January 21, 1934 to Jake Butler, Sr. and Pauline Lucherk Schiel in Stafford, Texas. He joined the US... View Obituary & Service Information

The family of Robert Lee Butler, Sr. created this Life Tributes page to make it easy to share your memories.

Send flowers to the Butler, family.