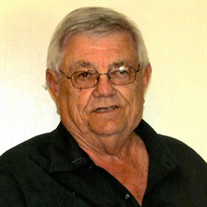 Funeral Services will be held at 1:00 PM on Monday, August 10, 2020 in Delhomme Funeral Home - Maurice, for Robert "Bobby" Earl Futch, 74, who passed away on August 7, 2020. Fr. Paul Bienvenu, Pastor of St. Alphonsus Catholic Church, will conduct the funeral services. Burial will take place in St. Alphonsus Mausoleum. Bobby, a resident of Maurice, was the son of the late Levy Futch and the former Minerva Broussard. A man of many hobbies, talents and interests, Bobby's life spoke for itself. Everyone knew Bobby and he knew them as well; sometimes a little too well! Bobby will be dearly missed by family and friends alike. He is survived by his wife of 23 years, Cynthia Broussard Futch; son, Kevin D. Futch; daughter, Karen Futch Lavergne (Todd); step-daughter, Kira Viator; grandsons, Tyler Lavergne and Aiden Els; 7 grandchildren and 5 great-grandchildren; brothers, Edward Futch (Sheila) and Gilbert Futch (Lynn); and sisters, Jackie F. Manning (Frank), Gloria F. Domingue (Kirby) and Sharlene F. Dupre (James). He was preceded in death by his parents, Levy and Minerva Futch; brothers, Donald, Harold, Kenneth and Gregory Futch; and step-son, Chad Viator. The family requests that visiting hours be observed at Delhomme Funeral Home on Monday, August 10, 2020 from 9:00 AM to 11:45 AM. A Rosary will be prayed at 12:00 PM in the funeral home. Visiting hours will continue, following the Rosary, until the time of service. Pallbearers will be Kevin Futch, Tyler Lavergne, Todd Lavergne, Kylie Clark, Warren Clark and Jason Futch. Honorary Pallbearers will be Edward Futch, Gilbert Futch and Aiden Els. The family would like to thank Dr. Agostino "Gus" Ingraldi and his associates at the Cardiovascular Institute of the South, especially Kelly, for their compassionate care during their time of need. Personal condolences may be sent to the Futch family at www.delhommefuneralhome.com. Delhomme Funeral Home, 200 Chief H. Fred Road, Maurice, LA is in charge of funeral arrangements.

The family of Robert "Bobby" Earl Futch created this Life Tributes page to make it easy to share your memories.

Send flowers to the Futch family.