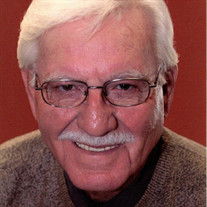 A Private Funeral Service will be held on Saturday, January 23rd, 2021, in the Delhomme Chapel of the Flowers for Robert Earl Tujague, Sr., 87, who passed away peacefully on January 14, 2021. Reverend Chester Arceneaux, Rector of Cathedral of St. John the Evangelist, will serve as Celebrant and will conduct the funeral services. Burial will take place in Cathedral of St. John the Evangelist Cemetery. Survivors include his beloved wife, Elizabeth (Betty) Tujague of 36 years; one daughter, Jennifer Fox and her husband Stephen; one son, Robert Tujague Jr., and his wife Norma; stepdaughter Rebecca Taylor and her husband Mike; stepson Christopher Smith and his wife Monica; twelve grandchildren; and eight great grandchildren. He was preceded in death by his first wife, Nellie Romero, his parents John Earl Tujague, and Philomine Gill and his two brothers, John Lee Tujague Sr., and Alvin Earl Tujague. Robert will be remembered for his humility, integrity, charity, and kindness. Robert loved his two dogs Amber and Asher. Years spent duck hunting, fishing in Henderson for brim and sacalait, and golfing with friends provided many memories. Times spent with his family were very special to him. Whether it was traveling, dancing, or golfing, he and his wife, Betty, had a wonderful life together. His talents as a chef in the kitchen were held in high regard by friends and family. Robert was born on August 19, 1933, a native of Lafayette where he attended and graduated from Cathedral Highschool and the University of Southwestern Louisiana. In addition, he completed more than 10 years of study through the Banking Administration Institute. He is a graduate of the School of Banking of the South and served as a member of the finance committee of the Louisiana Bankers Association. He was a member of the military during the time of the Korean conflict where he served in the 82nd Airborne infantry. Robert’s career in banking spanned a period of 55 years. It began with First National Bank of Lafayette in 1955 as a bank teller. He was employed by FNB for 20 years. He was also affiliated with American Bank & Trust Company, Whitney Bank (City President), LBA, Iberia Bank, & Farmer’s and Merchant’s Bank. Robert’s civic, charitable, and professional organizations include the following: Past president; USL foundation Board (Now ULL), American Easter Seal Society, Little league, Cystic Fibrosis Association, Lafayette Parish Conventions and Visitors Bureau. He also served on the Board of Directors of the United Givers Fund, Better Business Bureau, Our Lady of Lourdes Foundation, Greater Lafayette Chamber of Commerce, Lafayette Town House, Louisiana Bankers Association, Southwest Clearing House Association, Lafayette General Medical Center Membership Committee, & Member of Board of Trustees, USL (now ULL) Foundation Board, Industrial Advancement Fund of General Contractors. He also served as a Past Chairman of Southwest Louisiana Group and Past District Chairman and past Executive Board member of the Evangeline Area Boy Scout Council. Pallbearers will be Michael Taylor, Samuel Smith, Jace Miller, Robert Tujague III, T.J. Arceneaux Jr., and Duston Arceneaux. A special thanks is extended to the doctors and staff at Ochsner Lafayette General Hospital for the compassionate care given to Robert and his family. Personal condolences may be sent to the Tujague Family at www.delhommefuneralhome.com. Delhomme Funeral Home, 1011 Bertrand Drive, Lafayette, LA oversees the funeral arrangements.

A Private Funeral Service will be held on Saturday, January 23rd, 2021, in the Delhomme Chapel of the Flowers for Robert Earl Tujague, Sr., 87, who passed away peacefully on January 14, 2021. Reverend Chester Arceneaux, Rector of Cathedral... View Obituary & Service Information

The family of Robert Earl Tujague Sr. created this Life Tributes page to make it easy to share your memories.

A Private Funeral Service will be held on Saturday, January 23rd,...

Send flowers to the Tujague family.