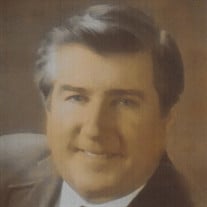 Roger Edward Thompson, completed life’s journey and entered his heavenly home on February 18, 2021. Roger was born in Crestline, Kansas to Robert E. and Norma J (Marshall) Thompson who both precede him in death. Also preceding Roger in death are his two brothers, Robert “Buddy” and Gregg Thompson and his sisters Barbara Jean “Peg” O’Hara and Jane Tener. Roger was a graduate of Galena High School in Kansas and following his completion of High School he enrolled at Pittsburgh State University wherein he earned his Bachelor’s Degree. After college, in August of 1954, Roger enlisted in the United States Military proudly serving his country Honorably, serving Military Theaters of Operation in England, France and Germany. During his service to our country, Roger earned the National Defense Service Medal on June 7, 1955 along with a commendation and recognition of duty assignment in Depot Co. 7851. Following his discharge from the United States Army, Roger went on to pursue a career in the insurance business (first) as an agent and ultimately was promoted to a District Manager with Prudential Insurance Companies of America, an executive position he proudly held for over 40 years, mentoring many young agents to their success and earning Prudential’s highest award as District Manager of the Year and the Presidential Award for production and successful agency production until his retirement. Roger’s business and insurance ethic was encompassed with respect and integrity which were key elements to his success. While he enjoyed a successful career in the insurance business, he was an avid and outstanding golfer and a member of Oakbourne Country Club in Lafayette, Louisiana. While he enjoyed the social aspects of golfing and tennis, his greatest success came from the love of his family and all that he enjoyed during his life. Although his long walk in life has ended, his heavenly journey has just begun. Roger would not want us to be sad but want us to revel in all that life has to offer. Roger would want to be remembered for his big heart, deep soul and giant personality and to remind us “It is the little things in life which can bring us the biggest enjoyments.” Roger is survived by his loving wife of 39 years, Jenny Thompson of Lafayette, Louisiana, his four children; Bruce Edward Thompson (Sarah) of Lafayette, LA; Bradley Earl Thompson (Jennifer) of Destrehan, LA; Brian Eugene Thompson (Laura) of Zachary, LA; and Beth Ann Thompson Moore (Bart) of Arlington, TX. With insurmountable love, he is survived by his six grandchildren, Tyler Thompson, Tayler Thompson, Daniel Laperouse (Christin); Bailey Moore; Brock Moore and Morgan Thompson and a Great-Grandson, Brooks LeBlanc. Services will be held on Saturday, February 27, 2021 at Delhomme Funeral Home, 200 Chief H. Fred Road, Maurice, Louisiana 70555. Visitation will be from 10:00 AM until 12:00 PM, with a Mass of Christian Burial to follow at 12:00 noon at St. Alphonsus Catholic Church, 8700 Maurice Avenue, Maurice, LA 70555. Interment will follow immediately at St. Alphonsus Catholic Cemetery. Personal condolences may be sent to the Thompson Family at www.delhommefuneralhome.com. Delhomme Funeral Home, 200 Chief H. Fred Road, Maurice, LA, is in charge of funeral arrangements.

The family of Roger E. Thompson created this Life Tributes page to make it easy to share your memories.

Send flowers to the Thompson family.