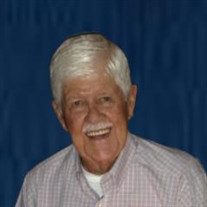 Funeral Services will be held at 4:00 PM on December 16, 2021 in Delhomme Chapel of the Flowers for Roger Trahan, 87, who passed away on December 11, 2021 at his home. Reverend Kevin Bordelon will conduct the funeral services. Inurnment will take place in St. Joseph #2 Mausoleum in Rayne at a later date. Mr. Trahan, a resident of Lafayette, was the son of the late Adam Trahan and the former Ella Wingate. He is survived by his beloved wife of 64 years, Cynthia LaChaussee Trahan; three children, Angi Trahan and partner, Donna Meaux, Mark V. Trahan and wife, Angie, and Ryan J. Trahan and wife, Angie; grandchildren, Emily Trahan and fiance, Max Koch, Gavin Trahan, Logan Hayes and wife, Abby, Angelle Bourgeois and Ava Bourgeois; sister-in-law, Nedia LaChaussee, brother-in-law, Joe Marks as well as several nieces and nephews. He was preceded in death by his parents; sister, Genny Marks; in-laws, Hazard and Rosa LaChaussee, and brother-in-law, Merlyn LaChaussee. The family requests that visiting hours be observed at Delhomme Funeral Home - Bertrand on Thursday, December 16, 2021 from 11:00 AM until time of service. The family would like to thank the staff of Hospice of Acadiana especially, Karen, Julie, Carol, and Alyssa, and Kim with Senior Helpers. In lieu of flowers, donations may be made in his memory to Hospice of Acadiana, Food with Love, and St. Edmunds Catholic School in Eunice. Personal condolences may be sent to the Trahan family at www.delhommefuneralhome.com. Roger Trahan and his family were cared for and entrusted final arrangements to Delhomme Funeral Home, 1011 Bertrand Drive, Lafayette, LA.

Funeral Services will be held at 4:00 PM on December 16, 2021 in Delhomme Chapel of the Flowers for Roger Trahan, 87, who passed away on December 11, 2021 at his home. Reverend Kevin Bordelon will conduct the funeral services. Inurnment will... View Obituary & Service Information

The family of Roger Trahan created this Life Tributes page to make it easy to share your memories.

Send flowers to the Trahan family.