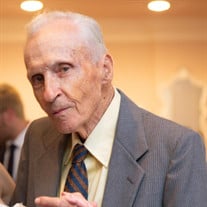 A visitation will be held at 2:00 PM and a funeral service will be held at 3:00 PM on Tuesday, July 28, 2020 at the Delhomme Funeral Home chapel for John Russell Comeaux, 96, who died peacefully on July 22, 2020 at his home. Russell was born on October 31, 1923 in Lafayette, LA to Fernand Comeaux and Bertha Verot Comeaux. He attended St. Cecelia Catholic School in Broussard and graduated in Engineering from Southwestern Louisiana Institute, now known as the University of Louisiana at Lafayette. Russell proudly served the United States during World War II as a member of the U.S. Navy aboard the U.S.S. Maryland. He achieved the rank of Seaman First Class and earned 6 battle stars for the Battles of Tarawa, Kwajalein, Saipan, Palau, Leyte, and Okinawa. During his time of service, Russell was onboard the U.S.S. Maryland when it was attacked at sea during the Battle of Leyte Gulf, the largest Naval Battle in the Second World War, and also when it was bombed during the Battle of Okinawa. Despite suffering injuries during these assaults, Russell survived and continued his military service throughout the Pacific. For his bravery and fortitude shown while serving his country, Russell was awarded two military honors: The World War II Victory Medal and the Asiatic-Pacific Campaign Medal. After returning home from the War, Russell completed his engineering degree and then worked at Forest Oil as an engineer. While he found great pleasure and success in his engineering career, Russell most enjoyed working and spending time outdoors. His love of gardening and the outdoors inspired him to open a nursery, which he ran from the early 1950s to the mid 1960s, while still working at Forest Oil. Russell remained devoted to his family, especially his parents, throughout his life. He returned to his parents’ house to help care for them. During this time, he also helped raise cattle and looked after his family’s home. Russell always worked hard and valued his independence. He remained very hands-on and active in the tending of his home and land up until his passing. His dear friend Robert Broussard worked by his side for 30 years. Throughout his life, Russell was known and loved by friends and family for his generosity, his sharp wit, and his strong work ethic. Russell is survived by his nieces and nephews Carolyn Chesson Brupbacher, Kathryn Comeaux Lessard and her husband Thomas, James F. Comeaux and his wife Jennifer, and Stephan Comeaux and his wife Catherine, and Cathy Chesson, widow of Douglas M. Chesson, Jr. He is survived by many great-nephews and great-nieces: Matthew Chesson and his wife Jessica, Allison Chesson, Kristen Chesson Simoneaux and her husband Tyler, Elizabeth Brupbacher Bernard, Patrick Brupbacher, Phillip Brupbacher and his wife Lacy, Emily Brupbacher Lyles and her husband Tom, Jennifer Lessard Donovan and her husband Michael, Katelyn Lessard Christensen and her husband Brad, Meaghan Lessard, Kristen Lessard Peters and her husband Nicholas, Camille Comeaux, Caroline Comeaux, Jolie Comeaux, Cecile Comeaux, Amelie Comeaux and also 17 great-great-nephews and nieces. Russell was preceded in death by his father, Fernand Comeaux and his mother, Bertha Verot Comeaux, his younger brother, James Carol Comeaux and his wife Nellie Fournet Comeaux, his younger sister Willa Dean Chesson and her husband Dr. Douglas M. Chesson, and his nephew Douglas M. Chesson, Jr. Pallbearers will be Stephan Comeaux, Jim Comeaux, Robert Broussard, Patrick Brupbacher, Phillip Brupbacher, and Matthew Chesson. Honorary pallbearers will be Mackie Verot and Richard Paul Broussard. The family wishes to thank Ron Mount, RN and Roslyn Charles, HHA at NSI Home Care, and Louise Guidry and Sarah C. Simon for all of their professional and compassionate care of Russell during his final days. Visitation will be held on Tuesday, July 28, 2020 at 2:00 PM with a service at 3:00 PM at Delhomme Funeral Home chapel. Interment will be at Lafayette Memorial Park. In accordance with current mandates a face mask must be worn in the funeral home and social distancing guidelines must be maintained throughout the visitation, service, and graveside. Personal condolences may be sent to the Comeaux family at www.delhommefuneralhome.com. Delhomme Funeral Home, 1011 Bertrand Drive, Lafayette, LA is in charge of funeral arrangements.

A visitation will be held at 2:00 PM and a funeral service will be held at 3:00 PM on Tuesday, July 28, 2020 at the Delhomme Funeral Home chapel for John Russell Comeaux, 96, who died peacefully on July 22, 2020 at his home. Russell was born... View Obituary & Service Information

The family of Russell Comeaux created this Life Tributes page to make it easy to share your memories.

A visitation will be held at 2:00 PM and a funeral service will...

Send flowers to the Comeaux family.