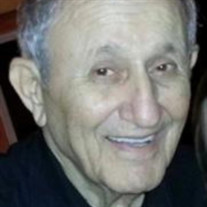 Sammy Abraham died on January 16, 2021. He was born on October 17, 1931 in Vinton, Louisiana. He was the eighth child of Joseph and Helen Mack Abraham. He graduated from Lake Charles High School in 1950. He attended college at McNeese State University for a short while prior to joining the Navy. He went into active service in the Navy on July 2, 1951. He was later honorably discharged after his service on July 1, 1959. On his return to Lake Charles, he met his future wife while working at his family-owned grocery store. He was married to Fayetta Louise Schexnider on December 6, 1959 in Kaplan, Louisiana. They had a long-lasting marriage of 60 years and raised 6 children. He and his wife later moved to Lafayette, Louisiana where they would reside for the rest of their lives. He began a vibrant career as an entrepreneur, eventually starting his premier distributorship, Quality Brands, in 1961. He sold this company in 1980 after years of a successful and colorful career. He was preceded in death by his wife of 60 years, Fayetta Louise Abraham, and his daughter, Lilly Christina Abraham. He was also preceded in death by his parents; five brothers, Reverend Nicholas Joseph Abraham, George Abraham, Mack Abraham, Johnny Joseph Abraham, and August “Gus” Abraham and one sister, Mary Abraham Burnham. He is survived by his sister, Sylvia Seals; his five children and their spouses, David and Vickie Abraham, Helene and John Dorsa, Grady and Danielle Abraham, John and Melissa Abraham, Matthew Abraham and Suzanne Abraham. He is also survived by seven grandchildren and their spouses, Austin and Caitlin Abraham, Taylor and Jacques Billeaud, Sarah Abraham, Gabrielle Abraham, Luke Abraham, Ava Abraham, and Avery Abraham: and three great-grandchildren, Corinne and Camila Billeaud and Aidan Abraham. The family requests that visiting hours be observed at Delhomme Funeral Home - Bertrand on Thursday, January 21, 2021, from 4:30 PM until 9:00 PM. A Rosary will be recited at 6:30 PM on Thursday evening in the funeral home. Visiting hours will continue on Friday, January 22, 2021, from 9:30 AM until the time of entombment at noon in Calvary Mausoleum. Personal condolences may be sent to the Abraham Family at www.delhommefuneralhome.com. Delhomme Funeral Home, 1011 Bertrand Drive, Lafayette, LA, is in charge of funeral arrangements.

Sammy Abraham died on January 16, 2021. He was born on October 17, 1931 in Vinton, Louisiana. He was the eighth child of Joseph and Helen Mack Abraham. He graduated from Lake Charles High School in 1950. He attended college at McNeese State... View Obituary & Service Information

The family of Sammy Abraham created this Life Tributes page to make it easy to share your memories.

Send flowers to the Abraham family.