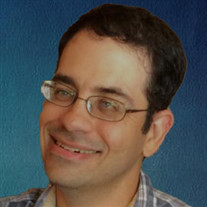 A Private Funeral Service was held in the Delhomme Chapel of the Flowers for Scott Thomas Dore, 45, who passed away on August 8, 2021. Rev. Joseph Campion, Pastor of St. Edmond Catholic Church conducted the funeral service. Burial took place in Calvary Cemetery. Scott, a native of New Iberia and resident of Lafayette, is survived by his parents, Thomas "Tommy" and Helen Hebert Dore; sister, Sara Dore Terro (Justin); niece, Eliza Mae Terro; and paternal grandmother, Geraldine "Gerry" Dore. He is also survived by a host of aunts, uncles, and cousins, five precious Godchildren, and the best friends anyone could ever dream of having. He was preceded in death by his maternal grandparents, Frank Hebert, Lillia Mae Comeaux Hebert, and Marjorie Zimmerman Hebert, paternal grandfather, Lawless Dore, and aunt Georgia Buteaux, who was also like a grandmother to him. During Scott’s childhood, he enjoyed time with his family, building with Legos, drawing, fishing, and spending time with his Dad in the Boy Scouts, achieving the rank of Eagle Scout and teaching his little sister all of the scouting skills he learned along the way. He received his first computer, a Commodore 64, from his grandparents in the mid 1980s and his love of programming and complete obsession with Apple technology began. Scott was a 1994 graduate of Catholic High School where he was an honor student and manager of the football team. He went on to attend what was then USL, majoring in computer science, and earning his bachelor’s degree in 2000, right as the university became UL Lafayette. Scott then began his lifelong computer programming career at Firefly Digital where he would have soon celebrated his 20-year work anniversary. He adored his work family and his career as a website developer and often used his extensive computer knowledge to help his technologically confused family. Scott knew everything there was to know about every Apple product on the market and had plans to buy a Tesla truck as soon as they hit the market. He was a forever faithful and dedicated UL football fan who loved an afternoon of tailgating with friends before a game and wore red every Friday in support of the Ragin Cajuns. He loved attending Bach Lunch, Downtown Alive, and Festival International, often volunteering his time at Festival with his coworkers. He also greatly enjoyed science fiction movies and TV shows and never missed the chance to watch a NASA rocket launch. Everyone that knew Scott will remember him for his sharp wit, kind-hearted nature, generous spirit, endless puns, and infectious laugh, not to mention the pranks he would pull on those he loved most, especially on his unsuspecting Dad and easily pranked Mom, which we are sure will continue as he watches over us trying to fix our computers on our own. He was an incredible son, brother, Funcle (because he put the FUN in being an Uncle to Eliza), godfather, and friend; always the first to offer a helping hand to anyone in need. He will be missed tremendously by so many. Pallbearers will be his family. In lieu of flowers, donations can be made to the Catholic High Endowment Fund, Faith House, or by sponsoring a Scout or STEM student in Scott’s memory. Personal condolences may be sent to the Dore family at www.delhommefuneralhome.com. Delhomme Funeral Home, 1011 Bertrand Drive, Lafayette, LA is in charge of funeral arrangements.

The family of Scott Thomas Dore created this Life Tributes page to make it easy to share your memories.

A Private Funeral Service was held in the Delhomme Chapel of...

Send flowers to the Dore family.