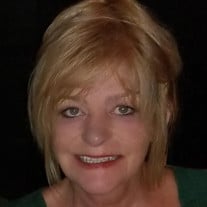 Funeral Services will be held at 1:00 PM on Wednesday, May 12, 2021 in Delhomme Chapel of the Flowers for Sharon Lynn Giddings-Gary, 54, who passed away on May 8, 2021. Brother David Plunkett, Pastor of Sanctuary of Praise - Mamou, will conduct the funeral services. The eulogy will be given by Madison Chaney and Jordan Thibodeaux. Sharon, a resident of Broussard, was the daughter of the late Jerry Giddings and the former Yvonne Hollier. She loved fishing and boating with her husband and family in Toledo Bend, Hot Springs, Lake Ouachita and Lake DeSoto, even searching for hermit crabs at the beach in Panama City. Sharon also had a passion hunting for Bigfoot, and even learned all the different calls. This made for adventurous nights while in Arkansas, Missouri, and Louisiana! Her love for cooking also made interesting family gatherings, as she always wanted to out-do all challengers to her recipes. No matter where Sharon was, the kitchen was her domain. Sharon had her little treasured squirrels and birds that would visit, while she pampered her small garden of tomatoes and cucumbers. Traveling was such a joy for Sharon. No matter where she was invited, Sharon was going as she was: free-spirited and always the life of the party. Sharon also loved to travel to Orlando, although she wasn’t a big fan of Disney, she enjoyed going to stay at her brother-in-law’s home (David) and redecorate it. Sharon’s new love was redecorating furniture with her mother, where they enjoyed the quietness of being together and designing old furniture into her treasures. She loved cheering on Summer, her niece, and her nephew (Madison and Logan) in all of their sports. In everything they did, Sharon was always their biggest fan! Sharon adored her husband, Scott, and her only child, Summer; her family was her world. Sharon loved coaching her daughter, Summer, in softball. She would often brag about Summer's accomplishments to all who would listen, supporting Summer every step of the way. In her eyes, Summer could do no wrong! She is survived by her husband of 27 years, B. Scott Gary; daughter, Summer L. Gary; mother, Yvonne Giddings-Alleman (Caroll); sister, Debbie Giddings Chaney (David); niece, Madison C. Chaney; nephews, Bart Gary, Brock Gary, CJ Alleman, and Logan Chaney; "little" sister, Alayna B. O'Toole (Patrick DeVille); brother-in-law, Dwayne K. Gary; step brother, Carl Alleman (Amy); step sister, Kim Alleman Stewart (Robert); aunts, Della Shamy, Bonnie O'Toole (Bill), and Lois Thibodeaux; uncles, Carroll Hollier and Lloyd Hollier Jr (Linda); canine companion, "Ryker"; feline companion, "Bentley"; and numerous cousins. She was preceded in death by her father, Jerry Wendel Giddings; paternal grandparents, L.P. and Bernice Giddings; maternal grandparents, Lloyd and Anita Hollier; parents-in-laws, Steven and Ruth Gary; uncle, Michael Gary; cousins, Antoinette Giddings-Smith, Angela Giddings-Guilbeau, and Terry Hollier; godmother, Elaine Venable; and godfather, Johnny Hollier. The family requests that visiting hours be observed at Delhomme Funeral Home - Bertrand on Tuesday, May 11, 2021 from 10:00 AM to 8:00 PM. Visiting hours will continue on Wednesday, May 12, 2021 from 8:00 AM until the time of service. Pallbearers will be Logan Chaney, Bill O'Toole, Brock Gary, Bart Gary, Todd Gary, and Patrick DeVille. Honorary Pallbearers will be Carroll Hollier and Lloyd Hollier Jr. Personal condolences may be sent to the Giddings-Gary family at www.delhommefuneralhome.com. Delhomme Funeral Home, 1011 Bertrand Drive, Lafayette, LA is in charge of funeral arrangements.

Funeral Services will be held at 1:00 PM on Wednesday, May 12, 2021 in Delhomme Chapel of the Flowers for Sharon Lynn Giddings-Gary, 54, who passed away on May 8, 2021. Brother David Plunkett, Pastor of Sanctuary of Praise - Mamou, will conduct... View Obituary & Service Information

The family of Sharon Lynn Giddings-Gary created this Life Tributes page to make it easy to share your memories.

Send flowers to the Giddings-Gary family.