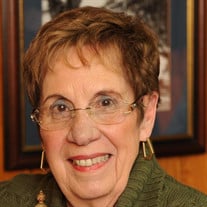 A Mass of Christian Burial will be held at 10:00 AM on Monday, February 21, 2022 in St. Pius X Catholic Church for Shirley Alexander, 90, who passed away on February 16, 2022. Fr. Steve LeBlanc, Pastor of St. Basil Catholic Church - Judice, will be Celebrant of the Mass and will conduct the funeral services. Entombment will take place in Cathedral of St. John the Evangelist Mausoleum. Mrs. Shirley, a resident of Lafayette, was the daughter of the late Chester and Polly Champagne. Mrs. Shirley spent her entire career promoting the education of the children of Lafayette Parish, first as a teacher, then as a teacher and supervisor of student teachers from UL. She later worked as a supervisor for the parish school system and helped in developing and implementing kindergarten for Lafayette schools. Upon her retirement from the parish school system, she was instrumental in the development of St Pius Catholic Elementary School and was hired as it’s first director. She is survived by her brother-in-law, John A. Alexander (Carolyn); and niece, Janice Alexander. She was preceded in death by her husband of 57 years, Ernest Joseph "Ernie" Alexander Jr. The family requests that visiting hours be observed at St. Pius X Catholic Church on Monday, February 21, 2022 from 8:00 AM until the time of service. Readers will be Jane Chiasson and Diane Desormeaux Gift Bearers will be Catherine Andrus and Peggy Castile. Pallbearers will be Richard Andrus, Jordan Morse, Eric Morse, Kevin Carrier, Bobby Castile, and Jourdan Castile. Honorary Pallbearers will be Jack Domingue, Jim Marble, and Dan Spreafico. The family would like to thank her close special friends that helped look after Shirley in her time of need. A special thanks to her caregivers, Mary Ann Menard & Debbie Hidalgo, for the compassionate care they provided. In lieu of flowers, the family requests donations be made to St Pius X Catholic Church in Shirley’s memory. Personal condolences may be sent to the Alexander family at www.delhommefuneralhome.com Shirley Alexander and her family were cared for and entrusted final arrangements to Delhomme Funeral Home, 1011 Bertrand Drive, Lafayette, LA.

A Mass of Christian Burial will be held at 10:00 AM on Monday, February 21, 2022 in St. Pius X Catholic Church for Shirley Alexander, 90, who passed away on February 16, 2022. Fr. Steve LeBlanc, Pastor of St. Basil Catholic Church - Judice,... View Obituary & Service Information

The family of Shirley Alexander created this Life Tributes page to make it easy to share your memories.

Send flowers to the Alexander family.