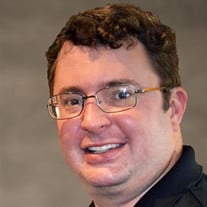 A Mass of Christian burial will be held at 3:00 p.m. on September 10, 2021, at the Cathedral of St. John the Evangelist Catholic Church for Stephen Patrick Breaux, 37, who passed away August 27, 2021 in Pecos, Texas. The Very Reverend Andrew Schumacher will be the Celebrant of the Mass and conduct the funeral service, with Stephen's uncle, George Jourdan, serving as deacon. Readers from sacred scripture will be Dianne Hebert and Amy Billeaud. Gift bearers will be Anne-Marie Mouton, Mary Margaret Thibodeaux, and Lindsey Breaux. A private inurnment will take place at Calvary Cemetery in Lafayette at a later date. Stephen was the son of Sissy Warner Breaux and the late Jean C. Breaux, Jr. of Lafayette. He is survived by his mother and his brother, John B. Darbonne, IV, a niece Dawson R. Darbonne, and a nephew, Aedan R. Darbonne, as well as many loving aunts, uncles, cousins and friends. He was preceded in death by his father, Jean, his grandparents Nelda and Sam Hood and Anne and Chester Breaux, and his cousins B.J. Jourdan and Evangeline Grace Breaux. Stephen graduated from Lafayette High School in 2002, and from Loyola University in 2007 with a degree in Music Business. He worked in the music industry for more than ten years, including a two year internship with Sony Records in New York City. In August of 2018, Stephen began work as a housing manager for Permian Lodgings in Pecos, Texas, where he distinguished himself and made many friends among his co-workers and associates. He was known and loved for his kindhearted, protective nature, his even temper, and his curious, adventurous spirit. Stephen was greatly loved and will be forever missed. The family requests that visiting hours be observed on Friday, September 10, 2021 at the Cathedral of St. John from 1:00 p.m. until the time of service. Pallbearers will be John B. Darbonne, IV, Dr. Carl Breaux, Robert E. "Buddy" Billeaud, Jr., Kevin Hebert, David Breaux, Dennis Mouton, Ashton Thibodeaux and Robert E. Billeaud, Ill Honorary Pallbearers will be William F. Hebert and Andrew J. Hebert. Memorial contributions may be made in Stephen's name to Hospice of Acadiana, or the charity of your choice. Personal condolences to the Breaux family are welcome at www.delhommefuneralhome.com. Delhomme Funeral Home at 1011 Bertrand Dr. is in charge of arrangements.

A Mass of Christian burial will be held at 3:00 p.m. on September 10, 2021, at the Cathedral of St. John the Evangelist Catholic Church for Stephen Patrick Breaux, 37, who passed away August 27, 2021 in Pecos, Texas. The Very Reverend Andrew... View Obituary & Service Information

The family of Stephen Patrick Breaux created this Life Tributes page to make it easy to share your memories.

Send flowers to the Breaux family.