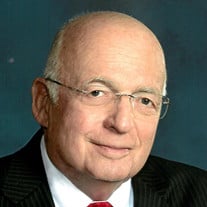 With a heavy heart, we say goodbye to Dr. Stephen I. Goldware who peacefully passed away on June 14, 2020. He was a devoted husband, father, grandfather, and friend. For over 50 years, he served Acadiana with great care and compassion as a neurosurgeon. He was a pioneer in the field of Micro-neurosurgery. Throughout his career Dr. Goldware dedicated himself to learn the latest techniques in neurosurgery to better care for his patients. Born in Omaha, Nebraska on May 24, 1940, he was the only child of Ben and Esther (Pollock) Goldware. When he was nine years old, his family moved to Dallas, Tx. He graduated from Hillcrest High School in 1957, Tulane University in 1961, and Tulane Medical School in 1965. Dr. Goldware then did a mixed internship at Charity Hospital in New Orleans, La. His training in neurosurgery was delayed during the Vietnam War when he entered the United States Public Health Service (USPHS). During his time in the USPHS he served as the general surgeon at the U.S. Federal Penitentiary in Lewisburg, Pa. (1966-1967). He was then transferred to the USPHS Hospital in Baltimore, MD where he did a one-year general surgery residency (1967-1968). The following year he became a clinical associate in brain tumor chemotherapy at the National Cancer Institute in Baltimore, MD. His next assignment was as the ship’s doctor for the U.S. Coast Guard Cutter, Hamilton in the North Atlantic. In 1969, he began his residency in neurosurgery at the University of Kansas Medical Center in Kansas City. Upon completion of his residency in 1973, he moved to Lafayette, LA to begin his practice as a neurosurgeon. In 1986, he proudly joined the U.S. Army Reserve, 904th Medical Detachment, where he trained neurosurgery residents at Walter Reed Hospital. In 1990 he was called to serve in Desert Storm as a Lt. Colonel with the 350th Evac Hospital in Saudi Arabia. Dr. Goldware worked hard but played hard too. He was a man of many hobbies – hunting, fishing, skiing, and golfing, to name a few. He loved doing magic tricks for his young patients. A talented photographer and musician, he enjoyed sharing photos and playing his guitar with family and friends. He loved his dogs like his children and trained them to be retrievers. He was preceded in death by his parents. He is survived by his wife of 57 years, the former Maureen Levitan, daughter Lauren Goldware Heun, sons, Jeffrey Goldware (Laura), Donald Goldware (Michelle), grandchildren, Gregory Heun, Mallory Heun, Stephen Allen Goldware, Megan Goldware and Benjamin Goldware, and loving dog Tank. Dr. Goldware was affiliated with the following organizations: American Association of Neurological Surgeons, Congress of Neurological Surgeons, Lafayette Parish Medical Society, Louisiana State Medical Society, American College of Surgeons, North American Spine Society, Southern Neurosurgical Society, New Orleans Neurosurgical Society, served on the boards of LAMMICO and Our Lady of Lourdes Hospital, President Neurological Association of Louisiana, Fleet Surgeon for the New Orleans Big Game Fish Club, American Heart Association and Stroke Council, Director of Neuro-Science Center at Lafayette General Medical Center, and Temple Shalom. His memory will forever be a blessing for all who knew and loved him. A Memorial Service will be held at a later date. My brothers, Jeff Goldware, Don Goldware, our mother, Maureen Goldware and I would like to share our heartfelt thanks to everyone for the prayers, kind words and heartwarming stories shared on the passing of our beloved, Stephen Goldware. We will announce plans for a memorial service when Covid restrictions have eased, and we can safely gather to celebrate his life. The memorial will be announced in the local newspapers, on facebook, and on www.delhommefuneralhome.com. In lieu of flowers please send memorials to: Tunnel to Towers Foundation https://tunnel2towers.org/, St. Jude Children’s Research Hospital https://www.stjude.org/ or the charity of your choice. Personal condolences may be sent to the Goldware family at www.delhommefuneralhome.com. Delhomme Funeral Home, 1011 Bertrand Drive, Lafayette, LA is in charge of funeral arrangements.

With a heavy heart, we say goodbye to Dr. Stephen I. Goldware who peacefully passed away on June 14, 2020. He was a devoted husband, father, grandfather, and friend. For over 50 years, he served Acadiana with great care and compassion as a neurosurgeon.... View Obituary & Service Information

The family of Stephen I. Goldware M.D. created this Life Tributes page to make it easy to share your memories.

With a heavy heart, we say goodbye to Dr. Stephen I. Goldware...

Send flowers to the Goldware family.