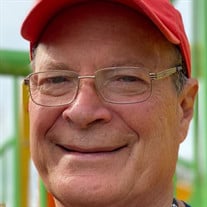 Funeral Services will be held at 3:00 PM on Wednesday, May 5, 2021, with visitation from 9:00 AM until time of services at Delhomme Chapel of the Flowers for Stewart Boldridge Blue, 73, who passed away after a long race with cancer on May 1, 2021, at his residence. Danny Collins, Community Bible Church, Cut Off, LA, will conduct the funeral services. Stewart, a resident of Lafayette, was the son of the late Robert E. Blue, stepson of the late Calvin L. Cooley and mother, Sara Jane Boldridge Cooley. He retired after 23 years as a District Manager of Warner Lambert Pharmaceutical Company (now Pfizer). In post-retirement, he committed himself to visiting his daughter and grandchildren in Cut Off, LA, and the sport he loved so much, Track and Field Stewart graduated from C. E. Byrd High School in Shreveport where he was an all-state high and low hurdler and recipient of the 1965 “John Brechtel Outstanding Athlete Award”. He later went on to attend USL on a track scholarship. After signing at USL as a hurdler, he moved to the 440 and sprints and set a 440 school record on only his third try. He helped USL set three school relay records and was a three-time all-American (Indoor and Outdoor Mile Relay and 440 relay in 1968 and 1969). He won the Gulf States Conference 440 as a freshman and as a senior and helped USL to claim three conference championships and one runner-up spot. He was also a member of the 1969 USA National Federation indoor mile relay national championship team at the Astrodome, in Houston, TX. Blue is a member of Ark-La-Tex Track & Field Hall of Fame in Shreveport, UL-Lafayette Athletic Hall of Fame, LSU Track & Field Officials Hall of Fame, University of Arkansas Officials Hall of Fame and Texas A&M Track & Field Officials Hall of Fame. Because of his love of the sport, he officiated every state high school outdoor championship, except one, since 1972 and has assisted in over 120 district and regional meets. In addition to his 42 outdoor state meets in Louisiana, he has assisted in 19 state meets in Texas, Arkansas, Mississippi, Alabama, and Florida. He was known as a "running rules guru" at the high school, NCAA, and USATF levels. At the international level, Stewart was a timing-assistant with the (Swiss) Timing group at the 1984 Olympics in Los Angeles; and in 1985, he was a timing assistant at the U.S. Olympic Festival in Baton Rouge for both Track and Field and Speed Skating. In total, he has officiated 38 NCAA indoor and outdoor national championships. His referee assignments included various Southland, Sun Belt, Missouri Valley, American South and Metro Conference championships and was recently the running referee at Texas A&M indoors and Northwestern State outdoors. He has been head umpire at Texas A&M, the SEC Indoor Championships, and the Sun-Belt Championships. In addition, he has served multiple years as head Finish line coordinator and head lap counter for NCAA and SEC Championships held at the University of Arkansas and Texas A&M, and has sat on the Jury of Appeals at the Big 12. He is a member of the Cajun Track (ULL), LSU, University of Arkansas, and Texas A&M Officials Associations, and he has officiated at every major collegiate conference in the U.S. and USATF. As a Master-level official and lecturer, he has officiated three USATF indoor senior championships. Among the most recent USATF honors, he was selected to the umpiring crew for the 2016 and 2020/2021 Olympic Trials held in Eugene, Oregon. A love for fishing he had. He would spend most of his time fishing near Half Moon and Mississippi on his favorite boat, the “Jamie B”. Later on, he enjoyed fishing behind his daughter’s house and Grand Isle with his grandson where their bond flourished. His greatest love and accomplishment in life was raising his daughter to be a God-fearing woman, confident and capable, just like him. But being “Boo” completed him. His love for his grandchildren was like no other. Last, but not least, the love for his wife was more than anyone could imagine. Family was always first to him. He is survived by his beloved wife, rock, and nurse of 36 years, Karen Schneider Blue; daughter, Jamie B. Guidry (Josh); grandchildren, Cy Joseph Guidry and Leighton Elizabeth Guidry; brothers, Robert Blue, Jim Blue, and Doug Blue; sister, Patty Sugrue; and stepsister, Helen Himes. He was preceded in death by his father, Robert E. Blue; mother, Sara Jane Cooley; and stepfather, Calvin Cooley. The Blue family would like to thank Stewart’s doctors, Dr. Joseph Brierre and Dr. Kemp Coreil; 5th Floor Oncology at Our Lady of Lourdes Regional Medical Center; Our Lady of Lourdes Infusion Center; Hospice of Acadiana and his wonderful and caring Nurse, Karen Nelson; and his sweet aid, Scarlet Rideaux. He had the dream team! In lieu of flowers, the family requests that donations be made to the Leukemia & Lymphoma Society and the various Track & Field Officials Associations of Texas A&M University, University of Louisiana at Lafayette, Louisiana State University, University of Arkansas, and the University of Alabama. Personal condolences may be sent to the Blue family at www.delhommefuneralhome.com Delhomme Funeral Home, 1011 Bertrand Drive, Lafayette, LA is in charge of funeral arrangements.

Funeral Services will be held at 3:00 PM on Wednesday, May 5, 2021, with visitation from 9:00 AM until time of services at Delhomme Chapel of the Flowers for Stewart Boldridge Blue, 73, who passed away after a long race with cancer on May 1,... View Obituary & Service Information

The family of Stewart B. Blue created this Life Tributes page to make it easy to share your memories.

Send flowers to the Blue family.