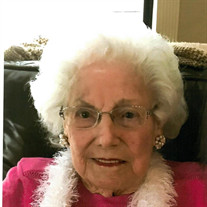 Funeral services will be held at 11:00 AM on Saturday, August 29, 2020, in the Delhomme Chapel of the Flowers for Terry L. Perram, 97, who passed away on August 24, 2020. Reverend Gilbert Dutel will serve as Celebrant and will conduct the funeral services. Interment will take place at Fountain Memorial Cemetery. Beulah LeRay Perram, known to all as “Terry,” was born on December 29, 1922 in Thibodaux, LA. She was the daughter of the late Otis LeRay and the former Emma Bonvillain. She had been a resident of Lafayette for the past 71 years. Terry moved to New Orleans as a young woman and began employment with the government, which eventually brought her to Washington, D.C., where she was employed with the U.S. Armed Forces and served as secretary to the Quartermaster at the Pentagon Building. She later returned to Louisiana and was employed several years as the Secretary to the Dean of Engineering at SLI, now ULL. She retired at the age of 58 and pursued a life of travel and her joint passion of weaving and quilting with her husband. She was a member of the Quilting Guild and served as Arts Education Coordinator for the Acadiana Arts Council. She is survived by her daughter, Carol DeLarue and her husband Al; two grandchildren, Lance DeLarue and Dawn Simpson and her husband, Jeremy; five great-grandchildren, Carson DeLarue and his wife, Kelli, Jacob, Caroline, Samantha and Jack Simpson; and one great-great-grandchild, Henry DeLarue. She was preceded in death by her husband, Henry Perram. Pallbearers will be Carson DeLarue, Al DeLarue, Jeremy Simpson, Jacob Simpson and Jack Simpson. The family wishes to express special thanks to the loving staff at The Blake Memory Care, Pelican Pointe Healthcare, Bridgeway Hospice and Chase Hospice. The family requests that visiting hours be observed on Saturday, August 29, 2020, from 9:00 AM until the time of services at 11:00 AM. A Rosary will be recited at 10:15 AM. In accordance with current mandates, a face mask must be worn in the funeral home and social distancing guidelines must be maintained throughout the visitation, service, and graveside. Donations may be made, in Terry’s name,to the Alzheimer’s Association. Personal condolences may be sent to the Perram family at www.delhommefuneralhome.com. Delhomme Funeral Home, 1011 Bertrand Drive, Lafayette, LA, is in charge of funeral arrangements.

Funeral services will be held at 11:00 AM on Saturday, August 29, 2020, in the Delhomme Chapel of the Flowers for Terry L. Perram, 97, who passed away on August 24, 2020. Reverend Gilbert Dutel will serve as Celebrant and will conduct the... View Obituary & Service Information

The family of Terry L. Perram created this Life Tributes page to make it easy to share your memories.

Funeral services will be held at 11:00 AM on Saturday, August...

Send flowers to the Perram family.