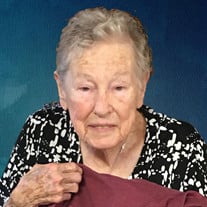 A Mass of Christian Burial will be held at 2:30 pm on Tuesday, June 8, 2021 in Sts. Peter and Paul Catholic Church for Thelma Jane Daigle, 87, who passed away on June 4, 2021. Reverend Mark Derise, Pastor, will be Celebrant of the Mass and will conduct the funeral services. Burial will take place in Sts. Peter and Paul Cemetery. Thelma was a Cajun storyteller/comic for over 30 years and has been inducted into the Hall of Fame for Cajun Comic Relief. She loved people and Cajun music. Thelma was a beloved mother, grandmother and great grandmother. Thelma, a resident of Scott, was the daughter of the late Lovensti Jeanise, Jr. and the former Lorena Savoy. She is survived by her children, Angela (Bob) Richard, Beckie (Dale) Lagan, and David (Glinda) Daigle; 4 grandchildren, Cody Daigle Orians, Casey Daigle, Dustin May, and Kerri Beth Castille; 6 great grandchildren, Levi May, Dallas May, Kallie May, Sophia Castille, Katharine Castille, and Luke Castille; 2 sisters, Shirley (Nelon "Shortie") Sonnier, and Linda Elkins. She was preceded in death by her parents; husband, Woodrow Stephen Daigle, and sisters, Eula Vidrine and Helen Higginbotham. The family requests that visiting hours be observed at Delhomme Funeral Home of Scott on Tuesday, June 8, 2021 from 8:30 AM to 2:00 PM. A Rosary will be recited at 10:00 AM in the funeral home. Pallbearers will be Kerri Lagan Castille, Dustin May, Byron Vidrine, Jim Richard, Dale Elkins, and Brad Lejeune. Honorary Pallbearers will be Dale Lagan, Bob Richard, Alan Matte, and Glinda Daigle. Donations may be made to Hospice of Acadiana in her memory. The family would like to thank the staffs of Hospice of Acadiana and Magnolia Estates for their compassionate care. Personal condolences may be sent to the Daigle family at www.delhommefuneralhome.com. Delhomme Funeral Home, 705 Marie Street, Scott, LA is in charge of funeral arrangements.

A Mass of Christian Burial will be held at 2:30 pm on Tuesday, June 8, 2021 in Sts. Peter and Paul Catholic Church for Thelma Jane Daigle, 87, who passed away on June 4, 2021. Reverend Mark Derise, Pastor, will be Celebrant of the Mass and... View Obituary & Service Information

The family of Thelma Jane Daigle created this Life Tributes page to make it easy to share your memories.

Send flowers to the Daigle family.