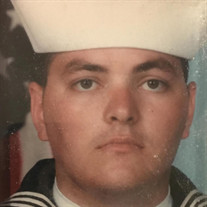 A Memorial Mass will be held at 10:00 AM on Friday, January 8, 2021, in St. Jules Catholic Church for Tommy Boudreaux, 55, who passed away at his residence. Fr. Dan Edwards, Pastor of St. Jules Catholic Church, will serve as Celebrant of the Mass and will conduct the funeral services. Mr. Boudreaux, a resident of Lafayette, was the son of the late Allen S. Boudreaux and the former Jeanette Forestier. Tommy graduated from Acadiana High School, class of 1984, and shortly after joined the U.S. Navy. He served for 5 years and afterwards began a career in the Oil & Gas Industry. Tommy was known by all as a fisherman, but at any other time he was working. Tommy was with Exxon-Kirby for over 30 years, and loved every bit of it. He will be dearly missed by family and friend alike. He is survived by his mother, Jeanette F. Perrio; brother, Allen David Boudreaux (Gretchen); sister, Sarah B. Lemons (Danny); and sister, Pauline B. Toutcheque (Christopher). He was preceded in death by his father, Allen Simon Boudreaux; brother, Tony James Boudreaux; paternal grandparents, Eufre and Gussie Boudreaux; and maternal-grandparents, Horace and Bertha Forestier. Personal condolences may be sent to the Boudreaux family at www.delhommefuneralhome.com. Delhomme Funeral Home, 1011 Bertrand Drive, Lafayette, LA is in charge of funeral arrangements.

The family of Tommy Boudreaux created this Life Tributes page to make it easy to share your memories.