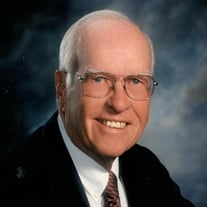 Vernon Henry Moret, Sr. passed away on April 16th, 2021. He was born to Lucien Joseph Moret and Lillian Cassard on June 20th, 1925 in New Orleans. He was inducted into the U.S. Army in 1943 and after completing advanced infantry training, he was assigned to the 105th Infantry Regiment of the 27th U.S. Army Division. He saw combat in the battles of Saipan and Okinawa during the Pacific campaign of World War II. For his service to the regiment, he was awarded the Bronze Star and the Combat Infantry Badge. He was part of the occupation force of Japan until he was honorably discharged in 1946 at the rank of Sergeant. After military service, he entered Loyola University New Orleans and graduated with a B. B. A. degree in 1950. Upon graduation he entered the insurance business with Metropolitan Life. Later he joined Liberty Mutual Insurance Company and was promoted to manager of their Jackson, MS. office. In 1959 he became their first Baton Rouge manager. In 1965, he moved to Lafayette to assume the management of the Louisiana Companies office. In 1984, he was appointed Executive Vice President and General Manager of Louisiana Companies Operations. He retired from Louisiana Companies in 1989. Mr. Moret was active in civic and social affairs. He belonged to the Chamber of Commerce, the Independent Insurance Agents of LA., the Lafayette Kiwanis Club, the Krewe of Gabriel and the Krewe of Zeus. Mr. Moret was an avid golfer joining Oakbourne Country Club in 1965 where he served many years on the Board of Directors and a term as President. Upon retirement, Mr. Moret did volunteer work with RSVP and SCORE. He was also a member of the Finance Board and the Insurance Committee of the Catholic Diocese of Lafayette. In 1948, he married Mary Joyce Jeansonne and together they raised 3 children. Survivors are his children, Vernon H. Moret, Jr. of Lafayette, Rene P. Moret and his wife, Janet of Huntsville, AL., and Michelle Moret Todd and her husband, Michael of Highlands, NC.; his sister-in-law, Catherine of Frederick, Maryland; five grandchildren and 4 great-grandchildren. He was preceded in death by his parents; his wife, Mary Joyce; his older brother, Lucien J. Moret, Jr.; his younger brother, Cassard (Cass) Moret and wife, Janice; Vernon Jr.’s wife, Debbie and a grandson, Patrick Moret. He will be interred at Lafayette Memorial Park Cemetery next to his late wife, Mary Joyce. A private family service will be conducted at a later date. The family requests that if you wish to honor his memory, donations can be made to St. Jude in his honor. Personal condolences may be sent to the Moret family at www.delhommefuneralhome.com. Delhomme Funeral Home, 1011 Bertrand Drive, Lafayette, LA is in charge of funeral arrangements.

Vernon Henry Moret, Sr. passed away on April 16th, 2021. He was born to Lucien Joseph Moret and Lillian Cassard on June 20th, 1925 in New Orleans. He was inducted into the U.S. Army in 1943 and after completing advanced infantry training, he... View Obituary & Service Information

The family of Vernon Henry Moret, Sr. created this Life Tributes page to make it easy to share your memories.

Send flowers to the Moret, family.