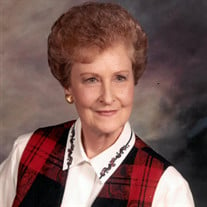 Funeral Services will be held at 11:00 AM on Tuesday, April 20, 2021 in Asbury United Methodist Church for Vivian S. McCormick, 87, who passed away on April 14, 2021 at her residence. Rev. John Cannon, Pastor of Asbury United Methodist Church, will conduct the funeral services. Burial will take place in Memorial Gardens of Columbus in Columbus, MS. Mrs. McCormick, a resident of Lafayette, was the daughter of the late Truman E. Ballard Sr and the former Vivian Perkins . Sherry, as she was known by her family and friends, was born in Kalola Springs, MS on June 29th, 1933. After graduating from Caledonia High School in 1951, she worked at Ruth’s department store until she met the love of her life, Robert ‘Bob” McCormick. They were married on September 15, 1956. With Bob being in the military, the family lived in several different places before settling down in Lafayette in January of 1968 . Sherry was very involved with her church, singing in the Chancel Choir, attending Ladies Circles and Bible studies. She spent many years working for a local retailer, Landry’s Young Fashions and earlier, Gays & Joys. She loved tending to her flowers and plants, but most of all, spending time with her family. Sherry was a faithful follower and servant of our Lord Jesus Christ. Her Christian beliefs were a significant influence on how she lived her life. She is survived by her children, Col Robert S. McCormick III USAF, Ret. (Kim), Susan E. Daniels (Patrick) and Lola A. Johnson (Derrick); grandsons, Christopher A. Daniels (Mollie), Maj James C. McCormick USAF (Nicole), Wesley R. Johnson and Hayden C. Johnson; great-grandchildren, Kate E. Daniels, Liam R. McCormick and Conor T. McCormick; sister, Agatha B. Barretine (George); and brothers, Truman E. Ballard Jr (Jeannette) and Gregory A. Ballard. She was preceded in death by her husband of 34 years, Robert S. McCormick Jr; parents, Truman and Vivian Ballard; and sister-in-law, Joyce Ballard. The family requests that visiting hours be observed at Asbury United Methodist Church on Tuesday, April 20, 2021 from 9:00 AM until the time of service. Pallbearers will be Christopher A. Daniels, Wesley R. Johnson, Hayden C. Johnson, Truman E. Ballard Jr, Gregory A. Ballard and Derrick Johnson. In lieu of flowers, the family requests that donations be made to St. Jude Children's Research Hospital or any leukemia foundations. Personal condolences may be sent to the McCormick family at www.delhommefuneralhome.com. Delhomme Funeral Home, 1011 Bertrand Drive, Lafayette, LA is in charge of funeral arrangements.

The family of Vivian S. McCormick created this Life Tributes page to make it easy to share your memories.

Customized sympathy cards. Mailed for you.