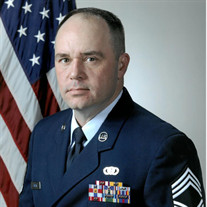 Chief Master Sergeant (Ret.) Wade Anthony Trahan 4/15/1970 - 11/15/2021 Wade Anthony Trahan passed away on Monday, November 15, 2021, at Our Lady of Lourdes Regional Medical Center in Lafayette, Louisiana. Visitation will be held at Delhomme Funeral Home in Scott, La. on Thursday, November 18, from 9:00 AM - 6:00 PM. A celebration of life service will be held following the visitation at 6:00 P.M. in the chapel of Delhomme Funeral Home. “The hardest man to defeat is the one who refuses to quit. He holds integrity high and seeks justice in all of his actions. He cannot be bought, and he will not stand by if injustice is present. He swore an oath to protect and serve all people. From all walks of life. This man does not do his duties for monetary gain, but for the betterment of his country and in service to his God. If you know someone who represents those core values pay your respects and honor them. Let them know you notice them. For me, that man is my father”- Zachary Tyler Trahan Wade was born and raised in Scott, Louisiana. After graduating from Acadiana High School in 1988, he enlisted in the United States Air Force where he achieved the title of Chief Master Sergeant. He served his country proudly for 28 years before retiring and moving back home. Wade is survived by his wife of 32 years, Rachel Fusilier Trahan; his sons Zachary Tyler Trahan and Benjamin Wade Trahan; his siblings Damon Trahan, Heather Trahan Bergeron, Amber Trahan Heels, and Casey Trahan; his in-laws Herbert Fusilier and Wanda Fusilier, Herbert Fusilier Jr. and Paxton Fusilier, as well as many nieces and nephews who adored him. Wade was preceded in death by his parents Glen Anthony Trahan and Sylvia Romero Trahan. Wade lived by the Air Force core values, “Integrity first, service before self, excellence in all we do.” John 11:25 “I am the resurrection and the life. The one who believes in me will live, even though they die.” Mr. Trahan and his family were cared for and entrusted final arrangements to Delhomme Funeral Home in Lafayette. Personal condolences may be sent to the Trahan family at www.delhommefuneralhome.com. Delhomme Funeral Home, 705 Marie Street, Scott, LA is in charge of funeral arrangements.

The family of Wade Anthony Trahan created this Life Tributes page to make it easy to share your memories.

Send flowers to the Trahan family.