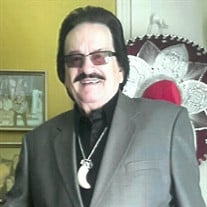 Funeral Services will be held at 2:00 PM on Friday, September 17, 2021 in Delhomme Funeral Home Chapel of the Flowers - Bertrand for Warren "Storm" Schexnieder, 84, who passed away on September 7, 2021. Deacon Cody Miller will conduct the funeral services. Burial will take place in Sts. Peter & Paul Mausoleum - Scott. A resident of Lafayette, LA, Warren “Storm” Schexnieder lived an amazing life with a passion for music. Born in Abbeville, Storm learned to play the drums and guitar from his father, a Cajun musician, at an early age. Beginning to play publicly in the early 1950’s, he befriended musician Bobby Charles. The two traveled to New Orleans to hear local rhythm and blues artists, greatly influencing Storm’s passion, musical tastes and his own drumming style. In 1956 Storm founded his own rhythm and blues/early rock and roll group, and two years later began recording for J.D. Miller. Miller was instrumental in Nasco records of Nashville releasing a 45-rpm record of Storm’s version of the old country composition “Prisoner’s Song”; the flip side was “Mama Mama Mama (Look What Your Little Boy’s Done).” The release broke into the Billboard Hot 100 and both songs became lifelong standards for Storm. Over the following years Storm recorded swamp pop music for numerous labels and played in numerous different projects over his career. Most notable were the Cypress Band with his friend of more than 40 years Willie “Tee” Trahan and Lil Band O’ Gold which toured around the globe. Warrens passion for his family and his love of music were second to none. It was nothing short of spectacular when Warren walked into a room. Even if you didn’t know who he was you knew he was someone special. He is survived by his children, Donna (Ralph) Thibodeaux, Warren Todd (Shelly) Schexnider, and Julie (Tommy) Daigle; grandchildren, Dustin (Chantelle) Thibodeaux, Leila Schexnider, Heather (David) Melancon, Erica Schexnider, and Zach Schexnider; great grandchildren, Caden, Riley, Rylin, and Aubrey; sister, Verna (David Roy) Schexnayder, and his canine companions, Jewel and Reese. He was preceded in death by his parents, Simon Schexnieder and the former Lois Meaux; and wife, Harriet Schexnieder. The family requests that visiting hours be observed at Delhomme Funeral Home - Bertrand on Friday, September 17, 2021 from 10:00 AM until the time of service. Pallbearers will be Dustin Thibodeaux, Ralph Thibodeaux, David Melancon, Tommy Daigle, Jordan LaSalle, Steve Grisaffe, Ronnie Daigle, and Wayne Toups. A public celebration of life will be held October 6th, 2021 at Rock ‘n’ Bowl de Lafayette. Personal condolences may be sent to the Schexnieder family at www.delhommefuneralhome.com. Delhomme Funeral Home, 1011 Bertrand Drive, Lafayette, LA is in charge of funeral arrangements

Funeral Services will be held at 2:00 PM on Friday, September 17, 2021 in Delhomme Funeral Home Chapel of the Flowers - Bertrand for Warren "Storm" Schexnieder, 84, who passed away on September 7, 2021. Deacon Cody Miller will conduct the funeral... View Obituary & Service Information

The family of Warren "Storm" Schexnieder created this Life Tributes page to make it easy to share your memories.

Funeral Services will be held at 2:00 PM on Friday, September...

Send flowers to the Schexnieder family.