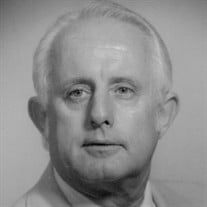 Funeral services will be held Monday, March 2, 2020 at a 1 PM Mass of Christian Burial at Holy Cross Catholic Church for Mr. William Edward “Bill” Logan, Jr who died in his sleep on Thursday February 27, 2020. Visitation will be observed at Delhomme Funeral Home – Bertrand on Sunday, March 1, 2020 from 4 PM until 8 PM. A Rosary will be recited at 6 PM on Sunday. Visitation will resume on Monday, March 2, 2020 from 8 AM until the procession departs for Holy Cross Catholic Church at 12:30 PM. The Reverend Mario Romero will be the celebrant of the Funeral Mass assisted by Deacon William “Bill” Pollingue, Bill’s Nephew. Entombment will be at Calvary Cemetery following the Funeral Mass. Left to cherish his memory are his six children: William E. Logan, III and his wife Charla Logan; Roger Brent Logan and his wife Melissa Logan; James Michael Logan and his wife Tammy Logan; Glenn T. Logan; Sylvia Ann Luckett and her husband Damian Luckett; and Gregory J. Logan and his wife Darcy Logan; nine grandchildren: Parker, Paige, Payton, Blaise, William, Joseph, Nicholas, Jesse and Sarah and his sister Mildred Logan Burress. Mr. Logan was preceded in death by his wife, Sylvia Olinde Logan and his wife, Patsy Grantham Logan, his parents, William E. Logan, Sr. and Gabriella Byrne Logan, brothers and sisters Mary Gabriella Logan Pollingue, Margaret Logan Hardie, Henry Logan, Ann Logan Mills, Charles Logan, Floyd Logan, and Eddie Logan. A native of Natchez, Mississippi, Bill moved to Pass Christian, Mississippi “the Coast” with his family during high school, a place he always cherished and visited often. After graduating from St. Stanislaus, Bill attended Spring Hill College in Mobile then moved to New Orleans to attend Loyola Law School. Soon after graduating Law School, he moved to Lafayette with his wife Sylvia Olinde Logan to start a family and embark on a new career, a community and its people he grew to love and cherish. During his years as a young lawyer he served as Assistant District Attorney protecting the citizens of Lafayette; as Parish Attorney representing many of the boards and commissions of the City and Parish Governments including the Lafayette Regional Airport Commission, the Lafayette Planning and Zoning Commission and established water and waste water districts to bring city water and sewage services into the rural parts of the parish. Much of what he did working tirelessly helping Lafayette develop and progress into the great community it is today, was done as a public service without compensation. Having deep roots in the Catholic Church, his Jesuit education and a strong faith, he was also a parishioner of Our Lady of Fatima Church where he was a member of the Knights of Columbus Fatima Council and later was called on to assist in establishing Holy Cross Catholic Church Parish as Lafayette grew and expanded south. Bill was an avid outdoorsman and sports fan, enjoying hunting and fishing with his family and attending LSU football games for over 50 years. He was active in Mardi Gras and was a long-time member and participated in several Mardi Gras Krewes, including the Krewe of Gabriel. In lieu of flowers, memorial contributions may be made to Our Lady of Lourdes Foundation, 4801 Ambassador Caffery, Lafayette, LA 70508, or lourdesfoundation.com. The family would like to express their appreciation to the doctors, nurses, and staff at Our Lady of Lourdes Hospital and at MD Anderson. The family would also like to express their appreciation to Ramona LaLonde his executive assistant for the past 25 years and to his caregivers who were with him and by his side twenty-four hours a day for the past five years Chinita, Crystal, Linda, Liz and Mary. Arrangements have been entrusted to Delhomme Funeral Home, 1011 Bertrand Drive, Lafayette. 337-235-9449.

Funeral services will be held Monday, March 2, 2020 at a 1 PM Mass of Christian Burial at Holy Cross Catholic Church for Mr. William Edward &#8220;Bill&#8221; Logan, Jr who died in his sleep on Thursday February 27, 2020. Visitation will be... View Obituary & Service Information