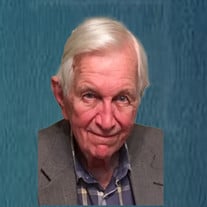 William Edward Rourke, age 91, passed away on September 14, 2021. Bill was born on March 21, 1930 in Baldwinsville, NY to Leo and Marion Rourke. William (Bill) as he was known graduated from the University of Wyoming with a degree in Petroleum Engineering. He served his country in the United States Air Force before attending college. While attending college he married Jean (Peetz) Rourke and to this union three children were born. Jean preceded him in death in 1981. He remarried Iva (Kellie) Rourke who also preceded him in death in 2017. Bill worked for and retired from Marathon Oil Company after 36 years of dedicated service, working in multiple locations and positions, the last being Western Gulf Coast Regional Manager. During his career he was a member of the Society of Petroleum Engineers (SPE), Louisiana Gulf Coast Oil Exposition (LAGCOE), Lafayette Petroleum Club and Oakbourne Golf Club. Bill enjoyed traveling, golfing, as well as cooking and baking. He is preceded in death by his wives, Jean (Peetz) Rourke and Iva (Kellie) Rourke; parents, Leo and Marian Rourke; sisters, Jeannette Rourke, Doris Walker and Lea Pabst; brother, Edward Rourke; and grandson, Chaz Crawford. He is survived by his children, Patty Langley of Columbus, OH; Kenneth Rourke and his wife Phyllis of Katy, TX; Carol Rourke of Fort Worth,TX; stepdaughter, Jamie Crawford and her husband Geoff of Katy, TX; five grandchildren, Kimberly Langley Long, Miles Langley, Emily Rourke, Evan Rourke, and Hallie Crawford; seven great-grandchildren; as well as numerous other relatives and friends. A Memorial Service will be held at 1:00 PM on Saturday, October 23, 2021 in Delhomme Chapel of the Flowers in Lafayette, LA. A brief visitation will be held at Delhomme Funeral Home - Bertrand on Saturday, October 23, 2021 from 12:00 PM until the time of service. Burial will take place at Lafayette Memorial Park Cemetery. Memorial donations in lieu of flowers may be made in Williams name to the Alzheimer’s Association.

William Edward Rourke, age 91, passed away on September 14, 2021. Bill was born on March 21, 1930 in Baldwinsville, NY to Leo and Marion Rourke. William (Bill) as he was known graduated from the University of Wyoming with a degree in Petroleum... View Obituary & Service Information

The family of William Edward Rourke created this Life Tributes page to make it easy to share your memories.

Send flowers to the Rourke family.