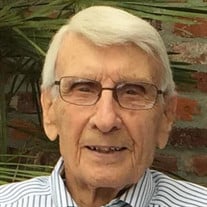 A Graveside Service will be held at 10:00 am on Tuesday, May 26, 2020, at Fountain Memorial Cemetery for William Odell Walker, 94, who passed away on May 23, 2020. Pastor Tom Reeder and Pastor Frank Carmical will conduct the funeral services. Bill, a resident of Lafayette, was the son of the late John Dee Walker and the former Ida Stuart. Upon graduation from high school in May 1943, Mr. Walker immediately enrolled in summer school at Texas Technical College in Lubbock, pursuing a degree in electrical engineering. He volunteered for service in the ROTC as the conflict of World War II intensified. In December of that same year, he was called to active duty, and upon evaluation, was chosen for the US Army Air Corps. His West Texas upbringing certainly prepared him to qualify as a Rifle Sharpshooter. He was initially sent to Basic Pilot Training and instructed on B-17s. Shortly thereafter, he was chosen to work on the top-secret development of the radar and its use on the B-29 Superfortress. He served honorably in the USAAC, now Air Force, from 1944 to 1946. He earned several military awards including an American Theater Campaign Ribbon, Good Conduct Medal, Victory Ribbon, and a Combat Medal. The greatest generation is sad to lose one of its own. Mr. Walker enjoyed a distinguished career with American General in insurance and financial planning from 1962-2018. Some of the highlights of his career include President’s Trophy (Outstanding Agent in Company) 1965, Company Millionaire’s Club 1968-1972, and CLU Agent of the Year 1963. He also served on the Aviation Committee Chamber of Commerce, Lafayette Airport Commission, and the Lafayette Juvenile and Young Adult Program, serving as President in 1983. Bill was a faithful member of Southside Bible Chapel since 1947, and served as an elder, pastor, and member of the Board of Trustees for many years. His hobbies included hunting, fishing, traveling, and photography. He earned his pilot’s license and loved flying. For many years, he was a regular at Hub City Diner. Often, people saw him wearing his WWII Veteran cap and shook his hand or treated him to a meal in gratitude for his service. During the past several months, he enjoyed wonderful care provided by Brookdale Senior Living Facility. The staff and residents loved him and enjoyed his guitar playing, singing, and genuinely positive, cheerful attitude. He is survived by his daughter, Lynette "DeeDee" Heinberg and husband, Jerry; grandson, Chris Callahan; sister, Faye Patterson; brother-in-law, Dr. Martin Zeke DuCote and wife, Becky; and nieces and nephews, Pamela Taylor, Gary Patterson, Bettsey Robertson, Karen Thow, Scott DuCote, Ruth Blundell, and Pam Peale. He was preceded in death by his parents and wife, Carolyn DuCote Walker. Pallbearers will be Chris Callahan, Scott DuCote, Ben Blundell, Jimmy Guidry, Chad Guidry, Mason Thow, Luke Blundell and Rayford Conerly. Due to Covid-19, a memorial service will be held at a later date. Personal condolences may be sent to the Walker family at www.delhommefuneralhome.com. Delhomme Funeral Home, 1011 Bertrand Drive, Lafayette, LA is in charge of arrangements.

A Graveside Service will be held at 10:00 am on Tuesday, May 26, 2020, at Fountain Memorial Cemetery for William Odell Walker, 94, who passed away on May 23, 2020. Pastor Tom Reeder and Pastor Frank Carmical will conduct the funeral services. Bill,... View Obituary & Service Information

The family of William Odell Walker created this Life Tributes page to make it easy to share your memories.

Send flowers to the Walker family.